another round of catch up: Night Has a Thousand Eyes, by Cornell Woolrich 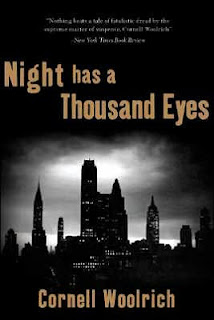 Francis M. Nevins, who wrote the introduction to this edition of Night Has a Thousand Eyes, notes that a fragment left behind in his papers after the author's death "explained why he wrote as he did."   Woolrich wrote that

As early as age eleven, he began to understand that death was unavoidable, noting that he had a "trapped feeling,

Nevins also reveals that Woolrich was "haunted by a sense of doom that never left him."  For me, Night Has a Thousand Eyes most keenly conveys the author's angst regarding that inevitable "darkness,"  his "sense of doom," and his attempt through his writing to "cheat death,"  given that an obsession with death and an attempt to outmaneuver fate are key elements of this story.

There is a short stretch at the beginning where the reader has no idea what he or she is about to be plunged into, since the story begins so normally after young detective Tom Shawn finishes his shift at the homicide department:


"Every night he walked along the river, going home. Every night about one."

It is his time to dream, to whistle,  to look at the stars, all things he couldn't do in a bus.  His routine sets him apart from his bus-riding colleagues; it's just a "minor defect," but it's what he does.  Tonight starts out as a "night like many others,"  but as he learns all too quickly,

Tom's life is about to change, and it starts with the discovery of a five-dollar bill at his feet.  The owner of the money and the purse Tom eventually finds is  Jean Reid, who is on the verge of committing suicide.  He stops her, and in an all-night diner, she relates to him a bizarre story that begins with her father's business trip to San Francisco and ends with her father in a paralyzing state of trauma stemming from fear.   From there, Tom takes it upon himself to help Jean and her father, enlisting the help of his fellow detectives in an attempt to bring down what he believes is a con man preying on the Reids.  It seems that every prediction this man has made about the Reids has come true so far, so when death on a set date is next in the cards, Mr. Reid just folds.

The book carries with it,  as Jonathan Latimer wrote about his hopes for the film of the same name, "a real sense of terror that these things were coming true."   Woolrich does a beautiful job of making that sense of terror palpable, and in Mr. Reid, he gives us a character who is not only petrified of his own death, but one who begins to feel that he's completely lost any control over his destiny.  Reid, a successful businessman, is obviously someone used to calling the shots and taking the reins of his business to get where he is socially and economically.    However, as each prediction becomes reality, he seems to become increasingly aware that he is no longer in control, and that whatever power he thought he had offers him nothing in the face of the fate that he believes has been mapped out for him.   Being forewarned does not mean forearmed in this case, since it brings with it "a curious sort of clammy terror," a "nightmare feeling."

There's much more going on here underneath but I'll leave that for other readers to discover.

Beware -- there is nothing happy going on here; then again it's noir so that should come as no surprise.  Where this book goes is captured by  Francis Nevins in the introduction, where he  acutely describes what's found in this novel as


"the kind of waking nightmare that lies at the heart of noir..."

in which, as each of the characters in this book will ultimately discover,  what could be more nightmarish than the idea that there is no escape?


Recommended to serious readers of darker fiction or noir.
NancyO at 10:49 AM
Share