first book post of 2019: The Syndicate, by Guy Bolton 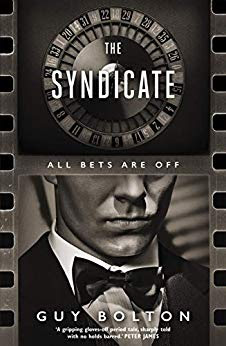 advanced reader copy (my thanks to the publishers!!)


The Syndicate is the second installment in Guy Bolton's series that begins with The Pictures, that (as the blurb says) centers around main character Jonathan Craine,


"a detective at LAPD who has spent his entire career as a studio 'fixer,' covering up crimes of the studio players to protect the billion-dollar industry that built Los Angeles."

I haven't read that book, but evidently things got pretty bad for Craine in the city of Angels, and he is now living on a farm in Bridgeport.  It's 1947, and Craine reflects at the beginning on "all the changes that had happened" in the meantime -- leaving LAPD, moving away from the city, raising a son without his wife, the war "and all the death that had come to the world." Happy in his solitude, he's about to find his peace shattered by a murder in the city he'd left behind.  His help is needed to find the killer, but the people who want it aren't asking: if he doesn't fall in with the plan, he risks losing not only his own life, but more importantly, that of his son.  Faced with no choice in the matter, Craine makes his way first to Las Vegas to meet with the mob, and then back to his old stomping grounds and his past.  We're not talking about just any murder here -- the corpse belongs to mobster Bugsy Siegel, and it will be Craine's job to find out who did him in.  Let's just put it this way: his is not an easy task:  he  has just five days, and his only help is an older hit man who is sent to Los Angeles with him.  He figures out early on that he's going to need much more if he wants to save his son,  and targets an ambitious  crime reporter, Tilda Conroy,  from The Examiner as an asset.

While this sort of book falls out of my range of normal reading fare (I'm generally a quieter, gentler reader not prone to violent stories and I'm not a fan of real-life people as fictional characters, preferring thinly-disguised replicas), the author has done so many things right here that I found myself enjoying it.    He not only made Craine's story a compelling read, but he moved it in unexpected directions -- it could have been a straight sweep completely focused on solving the murder itself, but it turns out that there's much more going on here: a peek at the darker story behind the growth of Las Vegas into what it eventually became, the  Red Scare in Hollywood, the blatant racism in the city (and the US) of the era, and the abuses of power by those whose job it is to protect not only the citizens of Los Angeles, but the citizens of the United States as well.  And while there's  enough happening to satisfy some readers' needs for fast-paced action, Mr. Bolton  never lets his audience forget how high the stakes are for Craine, who often turns inward to examine not only his current situation but also his past.  Finally, I have to say that I was highy impressed after reading a most interesting article at Shotsmag about how the author came up with the character of Tilda Conroy,   drawing on two real women reporters, Florabel Muir and Agness Underwood, who worked on the Black Dahlia murder and the murder of Bugsy Siegel, "two of the biggest stories of 1947..."   Kudos for that move, Mr. Bolton; it's nice to see women who might have otherwise been relegated to the back pages of history given their due both as an acknowledgment and in the form of one of the strongest characters in the novel.

The Syndicate isn't officially out until February (which is really just around the corner), but I see that early readers are already giving this novel very high marks.  It was much less about solving the crime for me than the factors I've already mentioned that gave me the most satisfaction (although really, I didn't see that ending coming, a definite plus); when an author can get as deeply into such a flawed character's psyche as Mr. Bolton has done here, well, let's just put it this way: anyone can write a murder mystery, but making it as psychologically intense as the author's done here is a job well done.

My thanks once again to Oneworld for my copy.