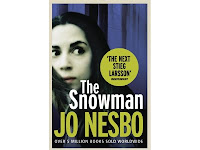 I highly suggest that readers who have not yet had the pleasure of reading Nesbø's series start with The Redbreast (not the first in the series, but the first to be translated into English) and move on from there in order.  Although The Snowman could be read as a standalone, it's much better read as part of the series, especially because of the ongoing development of the characters. If you don't end up with a "wow" going through your mind as you read through it, let's just say I'll be very surprised.
Posted by NancyO at 12:18 PM 7 comments:

Red April is a mix of political thriller, whodunit and a commentary on the misuse of power in a nation teeming with corruption.  It is a novel steeped in violence and death, often gruesome in detail, and takes place largely  in the city of Ayacucho, Peru. The year is 2000,  when the official line is that "terrorism was eradicated and contines to be eradicated at the present time, " referring to the ongoing series of wars between the military and the Sendero Luminoso, or Shining Path.  Like many other works of translated crime fiction, there's more than just a mystery at the heart of this book -- most notably, there's the question of an uncertain future for Peru and its people.

Félix Chacaltana Saldívar (Chalcatana) the main character of this novel, had requested and received a transfer to Ayacucho (which means "Place of the dead")  from Lima in his role as a prosecutor.  For most people, this would have been a step backward, or perhaps a demotion, but for Chacaltana, it's a return to his boyhood home. Leaving behind a bad marriage, he jumps into his work with gusto. Punctilious and pedantic by nature, he knows every law, is familiar with every procedure and spends his days writing reports. Normally, the prosecutor's office took care of cases of "drunken fights or domestic abuse, at the most some rape," but a  case comes up in which a man is found dead in a most horrendous manner and lands on Chacaltana's desk.  After some investigation of the case, the prosecutor makes what might be a connection to terrorist activity, but the military government wants him to keep quiet and tell no one, because despite Chacaltan's protests,  "nobody wants to hear about terrorists in Ayacucho":


Look Chacaltana, I'll be totally frank with you, and I hope this is the last time we talk about this subject. The police are controlled by the Ministry of the Interior, and the interior minister is a military man.  Doesn't that tell you something?....Our duty is to shut up and do what we're told. Is it so difficult to get that into your head? Listen, I have no interest in helping you because I don't feel like it. But even if I did want to help you, I couldn't. So don't get me involved in this because you'll fuck up my promotion. Please, I'm begging you! I have a family! I want to go back to Lima! ... Why don't you write a report and close the case once and for all? ...this is an emergency zone. A large part of the department is still classified as a red zone. Laws are legally suspended.


Not only are elections just around the corner, and there are promotions at stake, but Ayacucho is in the midst of Holy Week, which means tourists and massive celebrations.  But Chacaltana isn't to be mollified, and when a second murder is discovered, he is sent to the countryside to monitor the upcoming elections, obviously to get him out of the way.  And even though on his return he finds himself with no work to do "not even an indictment, not even a memorandum," he remains dedicated to solving the case.  The problem is that as the celebrations get into full swing, so does the killer, and eventually Chacaltana finds himself caught up in a situation where he doesn't know who to believe or who to trust.

Red April is not a tame crime thriller that you can read, put away and forget.  The author paints his scenes with often graphic violence, and at times the reality of the situation is read as though the reader is caught up in a surreal vision.  For example, the description of Yawarmayo, the rural area to where Chacaltana is sent as an election supervisor, is as disturbing as the descriptions of the mutilated bodies.  When he arrives in the countryside, he is greeted by the sight of dead dogs that have been strung up on streetlights wearing signs that say "This is how traitors die."  Explosions in the dead of night are commonplace, along with "howls from the hills." And the reaction of the townspeople? When Chacaltana asks if this is normal, he's told "No. They're pretty calm today." In fact, the entire atmosphere of this book is rather terrifying, all the more so because of the reality beneath the fiction.

The author's depiction of the situation in Peru is bleak:

Ayacucho is a strange place. The Wari culture was here, and then the Chancas, who never let themselves be conquered by the Incas. And then the indigenous rebellions, because Ayacucho was the midway point between Cuzco, the Inca capital, and Lima, the capital of the Spaniards. And independence in Quinua. And Sendero. This place is doomed to be bathed in blood and fire forever....Why? I have no idea. It doesn't matter.

The author has done a most excellent job of transmitting the realities of this most frightening political situation to his readers, most of whom will never be caught up in this sort of horror.

I found it to be an engrossing read that I couldn't put down.  Even though it was difficult to read at times because of its gruesome depictions and its dark and often claustrophobic atmosphere, it's a story that needed telling.  Definitely recommended, but not for readers of light crime.
Posted by NancyO at 2:24 PM No comments: