A Puzzle for Fools, by Patrick Quentin 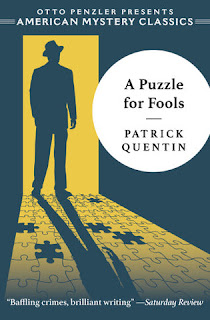 9781613161258
American Mystery Classics, Penzler Publishers
originally published 1936
237 pp
paperback
"It had been a puzzle for fools..."
A Puzzle for Fools is #21 on the Borges/Bioy Séptimo Círculo list, and it's a good one.  It is also the mystery series opener for the nine books featuring Peter Duluth, Broadway producer, ranging datewise from 1936 to 1954.
Peter Duluth has known his share of tragedy.  His wife Magdalene had died in a fire in the theater, and as a result his life started to hit the skids.  After "drinking to an eight-hour-a-day schedule" over the last couple of years,  and not "particularly reluctant" to drink himself to death, he decided that some time in a sanitarium might be a good idea.  Detoxing was pretty tough at first, but he made it through the worst and now, under the care of a trusted psychiatrist, he seems to be doing pretty well.  His "spells of depression" are less frequent and his physical self was also improving.  As this story begins though, he's not sure sure of himself -- it seems that in the dark of his room, he hears his own voice whispering to him he must get away, and that "There will be murder."  He knows he's not saying these things, and his fright overtakes him until he speaks to his psychiatrist, Dr. Lenz,  who lets him know that "this is not the first disturbing thing which has been reported recently," and that whatever he sees or hears "out of the ordinary, that thing is real and has its basis in fact."   The doctor also feels that there is a "subversive influence" at work in his sanitarium, causing him to worry about the patients and asks Peter for his help. While patients might not reveal things to him that upset them, they might say something to a "fellow inmate."
It isn't long until he learns about the strange things that are happening among the other patients, including a few who, like Peter,  have also heard themselves talking when they know they weren't.   More talk of murder follows, and it isn't too long until talk gives way to action and someone is actually killed in a way that leaves no traces of violence.  It's a bizarre crime on the impossible side, and while Peter has been allowed to keep up with the police and their investigation in confidence,  he has some ideas of his own as to how to discover who among them is a killer.   However, before he can make any real progress, the strange occurrences continue to plague the patients, and then there's another death.
After my less than great experience with A Puzzle for Players I was more than a bit  reluctant to once again wade into this series, but  I was surprised at how very much I enjoyed this one.  For one thing, the atmosphere is set at the beginning and doesn't let up over the course of the story.  There's just something compelling about the scene of the crime being inside of a sanitarium with its darkened corridors, locked doors and secrets; even better, this story really is a puzzle -- the author offers any number of clues to put together to get to the heart of this mystery, and his characters are so nicely drawn that at some point I realized that nearly every person in the sanitarium was a potential candidate for suspect, and that ultimately in this story, you can't really trust anyone.
Don't miss the introduction by Otto Penzler; while I don't quite agree with Penzler's assessment of Puzzle for Fools as a "suspense thriller in the Alfred Hitchcock mode," it still makes for a good few hours of fun and unputdownable reading.    Recommended to those readers who enjoy these older mysteries.  The armchair detective in me was highly satisfied -- I never guessed the who and so I was completely taken by surprise when all was revealed.  I call that a win.
Posted by NancyO at 9:17 AM No comments: