Boston is the location for this whodunit written in 1945 by yet another author I'd never heard of.  According to stopyourekillingme,  Elizabeth Fenwick Way (about whom you can read more here or here) wrote her first three mystery novels under the name E.P. Fenwick;  the rest of her crime/mystery fiction she wrote under the name Elizabeth Fenwick.   In 1963 she won the Edgar Award for The Make-Believe Man which I just bought used; it looks like most of her work is out of print but luckily there are used copies out there to find.  I say luckily because if Two Names for Death is any indicator, I will have to read them all, especially the two Fenwick wrote before this one.

Although he'd parked his cab in the shade, and although it's only 11:00 in the morning, Barney Chance finds himself sweltering in the relentless summer heat.  After a long wait a man and woman appear outside the Clyde Hotel; the man stays behind while the woman asks to be taken to an address on Waterford Street.  The next day, Barney is startled to discover that this same woman was now dead, and he realizes that he just might have information being sought by the police.  The woman was Mrs. Lenore Bellane; although initially Lt. Eggart of the Homicide Squad believed she'd committed suicide in her room at the Hotel Clyde, the ME reveals that she had not died by her own hand, but had indeed been murdered.  What is even more strange is that while Barney did not know the woman, he had recognized the address where she'd asked to be taken since that particular house, owned by the Schaftt family, is where he rents a room.  As the police investigation moves ahead, Barney will find himself in the middle of things, as will his boss Edward Bottman (Bott) who also rooms there, and the rest of the Shaftt family living on Waterford Street.  Things heat up for everyone concerned when yet another death occurs and Eggart finds himself under pressure by the higher-ups to get these cases solved.  And here, the less said about the plot the better so I'm keeping shtum.

As in many of the best mystery/crime novels from this time period, the skills shown by the author here are first rate, especially since Two Names for Death is only Fenwick's third novel.  There is nothing superfluous that detracts from the plot, the solution to the two deaths is most cleverly crafted, and the police action here seems logical and realistic.  But it's the complicated web of family relationships that the author has constructed that takes center stage here;  given all of the possible suspects along with a variety of motives, it's certainly not an easy task trying to discover the who.  I didn't, right up until the very last.

By the way, if you ever want to know what this book might look like after going through a wash cycle, here it is: 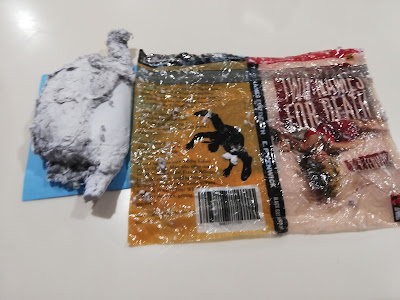 The very cool people at Stark House had sent me an advance reader copy, and I had made it to the midpoint of the novel when I lost the book.  I tore my house apart and looked everywhere except in the sheets from my bed that I'd thrown into the wash.  Imagine my surprise on finding my now very clean but unreadable copy; imagine the embarrassment of having to go to the publisher to explain what had happened and meekly asking for an e-copy so I could finish the book.  I'm sure they had a good laugh, and I thank them.  I later bought a real copy of the novel to add to my Black Gat Books shelf.