New! The Hanged Man: A Mystery in Fin-de-Siècle Paris, by Gary Inbinder 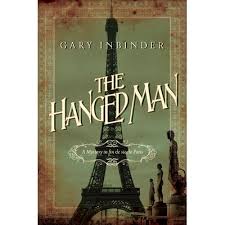 arc - my thanks to Katie at Pegasus and to the author

This one I liked. It moves along quickly, has an interesting plot where time is of the essence before something catastrophic happens, and it's historical crime fiction done very nicely.

The Hanged Man is the second installment in Gary Inbinder's historical crime series that began with The Devil in Montmartre, which introduced  Inspector Achille Lefebvre as the main character and a supporting cast that continues on into this book.   Here, our erstwhile detective discovers that what should be a straightforward investigation into a murder is anything but, and that he is going to need all the help he can muster.  And as Lefebvre gets closer to the answers to his questions, he realizes that time is of the essence in order to foil a sinister plot that could have serious repercussions that reach well beyond the city.  It's mystery with an edge of espionage and terrorism, all playing out on the streets of Paris that Lefebvre has sworn to protect.  While much lighter than what I normally read, there's still a lot of suspense and some good detective work going on here.

I am a major fan of historical crime fiction when it's done right (and trust me on this one, not all of it is),  and all of the research that the author has done comes through in a big way.  Lefebvre's  desire to move crime-solving techniques forward is one area of interest, but Inbinder's understanding of how things work historically is what makes this book more than just a standard crime novel.   He really gets that things don't just happen out of nowhere, and he's done a great job of linking a troubled past with the contemporary present (1890) here.  There are anarchists (split between "evolutionary" and "revolutionary")  and Russian émigrés who find themselves under covert or otherwise surveillance;  there are also people with "painful memories" of  the short-lived Paris Commune and the resulting Bloody Week of 1871,  "an old wound that had never completely healed." The author slides this background in without it being over lengthy in terms of exposition -- it fits nicely and naturally into the narrative.   And then there's the cultural side of Paris at this time which is also done well -- everyone knows about the can-can, the Moulin Rouge, the artists etc., but then there's also the darker and more decadent side -- as just one example,  the Cabaret de L'Enfer where absinthe is the drink of choice and doormen dress as Mephistopheles.


As a matter of personal preference, when I'm reading crime I'm much more into an investigation or a case than I am in the more domestic aspects an author provides in fleshing out his/her character. Here, the same is true --  at one spot there was a block of five pages of conversation between Madame Lefebvre and her mother, which sort of threw me a bit off balance and kind of took me away mentally from the suspense going on up to that moment.  That whole scene,  I think,  might have been shortened a bit, but as I said, it's a me thing.

Aside from that one issue,  The Hanged Man is a good read that will most certainly appeal to historical crime fiction readers, historical fiction readers in general, and readers who are looking for a new crime series.   I'd advise starting with The Devil in Montmartre  before grabbing a copy of this one, just for continuity's sake.  The two together will make for some fun hours of reading, and when book number three comes out, I'll be there. Considering that I rarely read series novels any more, that's saying something.
Posted by NancyO at 8:52 AM No comments:

and another badass mommy hits the streets. Sigh. Woman of the Dead, by Bernhard Aichner

The main character of this novel is truly one of a kind -- a young woman, happily married to a cop with two little daughters, who has a unique occupation: she's an undertaker, running the family business after the death of her parents some eight years prior to when this story begins.  But the fact that she's comfortable around dead people isn't what makes her stand out.

Blum is married to the love of her life, Mark and all is perfect in her world until one day her husband is killed in a hit-and-run accident. When she's finally able to start to pull herself together, she takes on the task of cleaning out Mark's stuff.  It's then that she runs across a series of conversations between Mark and a woman -- all professional, no hanky-panky -- but Blum's curiosity gets the better of her and she listens.  As the conversations get darker and more serious, she is convinced that the investigation  Mark was running had a major connection to his death.  She does what any normal person would do and runs to the police with her information, speaking with Mark's friend and trusted colleague, who assures her that the woman in the recordings is nothing but a liar. In short, he says there was nothing to any of this, and she should forget about it and go on with her life.  But Blum isn't convinced -- there's something about this mystery woman that catches her attention, and, of course, if this all has something to do with Mark's death, she wants to know. Eventually, she begins to realize that Mark was into something really ugly and really deep, and that his death was more likely a murder to keep him from getting too close to the truth.   So she decides to look into things herself, and ends up setting herself on a course of revenge.

When it comes down to it, this story has all of the elements of a typical badass heroine thriller, with a dark, actually psychotic twist involving her past that helps her do what she does once she has revenge in mind. But I do have to say that this book didn't set my heart racing as I think it was intended to do.    First of all, I figured out the BIG reveal quite early on so finishing this novel became a game of waiting to prove myself right.  Let's just say that guessing the who and the why has happened to me before, but when it happens so very early in the story, it actually wrecks things for me beyond repair.  And absolutely nothing after that point in this book made me question myself whatsoever.  Way too easy --  I think when someone is writing a crime novel, considering that his or her audience is probably full of seasoned crime-reading veterans, there should be the added bonus of an actual mystery going on.  Second, there is so much violence here that for me, at least, it was not at all a pleasure to read.  But those are minor issues compared to my third, which is that everything happens and falls into place so unrealistically easily that there was no challenge whatsoever in the reading.  I mean, seriously -- if you're going to write a thriller, shouldn't it be thrilling? Whoever wrote the dustjacket blurb saying this book is "Vivid, tense, and written with breakneck narration" probably needs to go back and read it again -- I didn't see any of this in here.

I feel absolutely awful when I don't like a book that I know someone has put so much effort into but I can't help it in this case.  On the other hand, a huge number of readers gave this book high marks and enthusiastic praise, so anyone considering this book should probably decide about it on his or her own. As for me, I'm just so done with badass mommies in a big way.

Posted by NancyO at 8:44 AM No comments: