Back to the Coast, by Saskia Noort 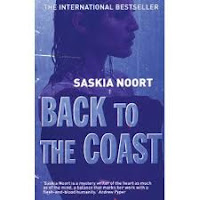 Maria Vos is a young woman with a lot on her plate. She's a vocalist in a cover band that plays parties, clubs, whatever gigs the group can get. She's a mother of two small children, the oldest only eight years old.  She's just left her son's father Geert after realizing that his depression is another weight she can't bear to carry. What she wants is to be a professional singer, but with so much going on, it's probably unlikely to happen. So when she finds herself pregnant for a third time, it is just too much. After some soul searching, she decides to have an abortion, as raising another baby would just be too much.  But not long after the procedure, Maria finds herself the victim of some sick notes & pictures left in her mail.  She is persuaded to go to the police, but the police can't do anything unless something happens to her -- it seems that threatening letters aren't enough to warrant any kind of official action.  But it isn't long until a very cruel joke is played on her, and her nerves just can't take much more.  To try and get some peace, Maria takes her two children "back to the coast" to stay for a while at her old childhood home.  Her persecutor, however, doesn't care where she is.

As the story progresses, a number of possible suspects emerge, all of them with strong motives.  Each character is drawn well; each has his or her own individual voice. Characterizations seem to be this author's strong point, and she focuses a great deal on Maria's relationships both in terms of men and her own family.  She expertly and believably paints Maria as a mom torn between her own career and her responsibilities to her children, and her problems are easily understandble, making her a sympathetic character.  Another positive point of this novel is that the tension in the story starts early and continues throughout. There's also a well-established sense of place, both in Amsterdam where Maria lives and the seaside.

The down side of the story is that I figured out the plot and the who very early on.  I know this sounds odd, but I very much enjoy being surprised as to the culprit's identity, so if the plot becomes so obvious that I can figure out the solution long before the end, I tend not to read that author's works again.  But in this case, the writing was quite good and I was rewarded at the end with more of the "why" than I expected. Another plus: the story's denouement also led to questions about other events throughout the novel, so I found myself going back into the book and having a few "aha" moments as things became a bit clearer.

Overall, Back to the Coast is a solid read, offering great characterizations, a good story, good writing and a level of tension that doesn't quite ease up throughout. Despite the fact that the solution is a bit obvious, I'd definitely read another novel by this author. I'd recommend Back to the Coast to readers of translated crime fiction, and to people who enjoy a bit of tension as they read.
Posted by NancyO at 8:58 AM