The Black Minutes, by Martín Solares

The setting of this novel is Mexico, in the city of Paracuán, a fictional port town,where "everything good disappears right when it's about to arrive."  It is a town where graft, corruption, and violence are an every day reality, where justice is just another word rather than a true concept.   While the police there are busy investigating crimes, the politicians ensure that if the drug cartels are involved, the police direct their attention elsewhere, often leading to the arrest and sentencing of otherwise innocent people.  Journalists who question the system are about as welcome as the plague.

It is one such journalist who is at the heart of this mystery.  Bernardo Blanco died during an investigation into a case of multiple homicides that had occurred twenty years earlier.  At that time, a number of young girls were killed by a man known only at the time as "The Jackal." The crimes were particularly gruesome, and Blanco, it seems, was on to the true identity of the man and was researching and writing a book.  When he is found murdered, the police chief puts Agent Ramón "Macetón" Cabrera on the case, "the only subordinate, who, in his opinion, could still be trusted." The chief's choice of lead investigators doesn't sit well with another police detective, Agent Chávez, and throughout the story, Cabrera finds himself in a precarious position both physically and politically for good reason: in Paracuán, between the power of the local drug cartel, the politicians in its pockets, the powerful business interests and the criminals whose crimes are often ignored, an honest cop is a rarity.  His questioning begins to produce some interesting leads, but just when he feels he's starting to get somewhere, he's pulled off the case.  It isn't long before Cabrera finds himself in a hospital after his car is deliberately rammed by a pickup -- it seems someone else doesn't want Cabrera on the case either.   As the novel progresses, Solares takes his readers back to the 20-year old Jackal case and its investigation by Detective Vicente Rangel, a former bar musician turned cop.  The story runs along two parallel courses, and eventually both plotlines are united.

Yet while the book is definitely a novel of crime fiction on the noir side of a police procedural, it also takes several surreal turns.  There are several areas where Solares introduces what is in the minds of the characters via their subconscious, the only orderly respite they have from all of the disorder of the society in which they exist. For example, Rangel brings in a known criminologist, Dr. Quiroz Cuarón, called "The Mexican Sherlock Holmes" by Time Magazine. Cuarón is this close to solving the case, but is plagued by a strange man in black before he can give Rangel his answer.  He also carries antidotes to known poisons in his first aid kit, which comes in handy when he suspects a conspiracy against him. Then there's the story of the author B. Traven (most known for his The Treasure of the Sierra Madre), one of the most famous visitors to Paracuán, who describes in detail how he came to be there, straight out of his novel The Death Ship. And if that's not enough, there are constant references to UFOs and the UFO craze.  But the writing is not random -- at the novel's heart is a look at a corrupt system that Solares seems to pin not only on the influence of the drug cartels, but on the presidency of Luis Echeverria -- a leader well known for his link to the cartels, for corruption and graft, and especially for the brutality of his special forces.  The book truly is, as Junot Diaz notes in his little blurb, "Latin American fiction at its pulpy phantasmagorical finest," but in an outstanding sort of serious way.

Frankly, it's tough to believe that this is Solares' first novel, because it is so intense and so captivatingly well written.  The Black Minutes is a mix of crime fiction and literature; simultaneously, it's an indictment of the corruption and the lack of the chance for real justice in a country where the police seem to be powerless due to several factors, most notably politics and the power of the drug cartels. It also predicts an uncertain future for the lives of Mexican citizens and for the country in general.  The novel is dark, edgy and downright unputdownable, and if you're a reader of crime fiction who doesn't mind the occasional trip into the human psyche or into politics, I highly recommend it. If you don't read crime fiction for the writing but rather the crime, you might still like it... there are enough suspects, a desire to get to the truth of it all, and the why behind the crimes, all classic elements of mystery and crime writing. Personally speaking, however, the crime aspect began to take on more of a secondary role as I got to the end  of the book, and  I came to see it more as a vehicle through which Solares could examine this most distressing situation that currently exists in his country.
fiction from Mexico 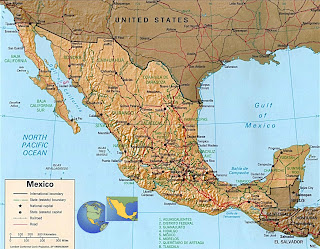