I bought this book nearly three years ago; now there's another Soho edition out with a spiffy new cover which is more modern than on my edition, much more hip and more up to date than the one I have:

But a book is much more than its cover, and that is definitely the case with Detective Inspector Huss.

This book  is the first in a series of nine books, only four of which so far have been translated to English: this one, Night Rounds, which just came out but which is actually book two in the series; The Torso, book three and The Glass Devil, book five. Book four, Cold Murder or Kallt mord has not yet been published in English, so hopefully with the continuing surge of  interest in Scandinavian crime fiction, Tursten's readers will not be kept waiting long.   I'd put this book up against any good Scandinavian crime fiction novel -- it's got a credible plot with a good mystery wrapped around it, believable characters, and as always, concerns about contemporary issues are embedded within the story.  It falls within the category of police procedural, and although I might disagree somewhat with the blurb on my cover calling the book "Sweden's Prime Suspect,” there is very little fault for readers to find in this novel.

Detective Inspector Irene Huss works in the Violent Crimes division of the Göteborg Police.  She is married to Krister, a chef in a popular and trendy restaurant in the city and has twin daughters.  Irene is a martial arts expert, a 10-cup a day coffee drinker and seasoned police officer, who lately finds herself trying hard not to become "jaded or cynical."  Her current home worries center on her daughter, who has a new boyfriend who convinces her to play in a skinhead band and to shave off her hair. But her home situation has to fade into the background for a bit while she investigates a new case: a very prominent financier has plummeted to his death off the balcony of his building. At first glance, it seems likely that it’s a suicide, but the medical examiner finds evidence that points to murder.  While starting their investigation into the death of Richard von Knecht, the 8-person investigative team soon finds itself  in the middle of another crime: someone has bombed the building where von Knecht had his office, and a dead and unrecognizable body has been found there.  With a multitude of suspects from which to choose, and possible links into the shady and violent world of the drug trade, the case seems to grow bigger as time goes on.  As the detectives seem to get closer to a solution, not only is their case thrown into a frenzy, but a series of clues lead some of them into a potentially deadly situation.

The novel's good points outweigh any negatives in the narrative. Its merging storylines provide an overall plausible plot which is easy for the reader to follow.  There are several red herrings scattered here and there throughout the story, keeping the reader guessing while the detectives do their work.  Irene Huss is a most believable character, a woman who tries to juggle home and work life, not always successfully, especially when her cop instincts take over at home and are resented by one of her daughters. Luckily she's got a great husband, and the home routine runs smoothly even though they often have working hours that don't match.  Tursten's portrayal of Irene Huss allows for inner angst over her daughters without letting it spill out in too many places in the story and not interfering too much with police work.  The other characters, especially those working in the Violent Crimes division, are also credible -- while they work together well for the most part, there are sometimes personality conflicts and friction between some of the team members. Within this framework, the author sets up room for discussion regarding sexual harassment in the work place, as well as the response of the higher-ups who do not exactly condone this harassment but who also do not set it as a high priority to be taken care of in any meaningful way. Tursten also explores the issue of illegal immigrants, looking at it from both sides, leading into a meaningful examination of why teens in general are attracted to gangs like Skinheads, which the author sees as a symptom of the ills of modern society.  And finally, she tackles the heartbreaking subject of AIDS, weaving it seamlessly and intelligently into the story.

The only major drawback I found in this book was that it wasn't long until I figured out the who in one of the crimes; from the clues it's really not that difficult to figure it out. The other I never had pegged, and trying to get to the solution made it impossible to put the book down.

Considering that Detective Inspector Huss  is the introduction to a series, it's very well done, ultimately very satisfying and intelligently written.  Tursten hits the ground running, and I can say that I've now finished the second novel Night Rounds, the pace doesn't let up in the next installment either. I would recommend this book very highly, not just for readers of Scandinavian crime fiction, but for crime fiction readers in general, as well as those who like credible and strong women characters in the lead role. 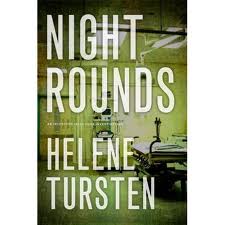 Although this book has just recently been published in English, it is actually number two in the Irene Huss series, and was originally published in 1999.  I have to admit that my interest level rose off the scale having only read the prologue of this novel, with the following bit of conversation:

Cue dramatic, ghostly music. Cut to the next chapter, in a hospital in the middle of a complete power outage, where the night nurse is on the way back to her station after helping the doctor on call with a patient whose alarm has gone off in the darkness. Sadly, the lack of power to the patient's respirator leads to his death.  Technically the ICU nurse should have taken charge, but she seems to have gone missing.  Looking through the window of the ward door, in the available moonlight, the night nurse sees a woman dressed in an old nurse's uniform, and recognizes her as the ghost of Nurse Tekla, who hanged herself in the attic some fifty years earlier and has supposedly haunted the hall ever since.

When the police and emergency services are called, a horrifying discovery is made: the missing nurse is lying dead in the electrical room, the victim of human, rather than spectral hands.  As the investigation gets rolling, another nurse goes missing. Are the two events connected? Where is the missing nurse? And what, if anything, does a suicide fifty years earlier have to do with this crime? When the Violent Crimes Division gets down to work, Irene Huss ultimately realizes that there are many interconnected and complicated relationships involving people in and around the hospital, and that sorting through all of them to get to the solution to current events may require an investigation into the past.

There are some good qualities that are brought out in Tursten's writing here.  First there is the balance between Irene's home and work life; having two teenaged daughters is not easy for any mom, let alone a mom whose job takes center stage. This time she must deal with one of the twins who goodheartedly takes on the cause of animal rights, only to discover that she's fallen in with a crowd that prefers violence as their method of communication.  How Irene rises to the occasion is an interesting story in and of itself.  There is also the author's focus on issues she obviously feels are important scattered throughout the novel: the ongoing sexual harassment issue at the police station, the perception towards immigrants, and a bit about the problems of the homeless and the mentally ill.  As in the previous novel, Tursten brings these issues to the fore without dwelling on them for any length of time that is not appropriate to the story, so the reader never gets the feeling that she's being preachy.  Finally, the whole ghost thing was a good hook to draw the reader in, whet his or her appetite and then get on with the story.

There is, however, one very glaring flaw (imho) in this story, and it has to do with a key piece of evidence that the police had all along that is obviously ignored at the time it's presented to the team. The detectives did not act on it until much later, even though the reader knows it must be important.  Had Huss and her team  been as quick to jump on it as they did with other evidence in their possession, they probably could have progressed much further in the case sooner than they did. This time I figured out much of the story early on, but then again, watching how the police unravel this complicated plot in an intelligent manner is why I read these books anyway.

I liked this book, although truth be told, probably not as much as the first book in the series, which is a bit unusual for me. So far, I'm liking this series, and I'm really bummed that I'm gearing up to read The Torso and will have to figure out what I missed in the hole between that book and The Glass Devil by the time I get to it. I hope this series does well in translation so that the other books will be published as well.  I can definitely recommend Night Rounds to readers of Scandinavian crime fiction, police procedurals and crime fiction in general.
Posted by NancyO at 2:01 PM