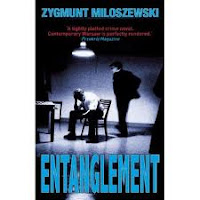 I can honestly say that this book is one of the best crime novels I've ever read -- not just this year, but in a seriously long time. The next book by Miloszewski is sitting here waiting to be picked up and I have to say that  I'm so wowed by Entanglement, the first novel in this series,  I can only look forward to something as great in his A Grain of Truth.   My collection of Bitter Lemon Press novels is also growing and kudos to these people for constantly bringing new and for the most part, outstandingly fine crime fiction to readers of  this genre. I don't know how they manage to bring out winners each time, but keep up the good work.

In Warsaw, a very weary  public prosecutor Teodor Szacki is finding life rather tiresome when on a Sunday home with his wife and little daughter he receives a call that he has to come in to work. Szacki, in his mid-30s, "an underpaid civil servant" whose wife is also a lawyer and similarly underpaid, is not in the best of moods to begin with, he's sent to what used to be a monastery, now a "red brick chimera, a cross between a church, a monastery and Gargamel's palace," where aside from the church in the building, there are also sublet spaces and rooms available for rent by various organizations.  One such set of rooms has been rented by a psychotherapist for himself and four of his patients, where over the weekend, they are engaged in Family Constellation Therapy, founded originally by German psychologist and philosopher Bert Hellinger. They are there hoping to resolve some of their personal issues; one of the attendees, businessman Henryk Talek, endures a particularly grueling session and afterward ends up dead with a meat skewer in his eye.  Very much overworked, Szacki is hating the idea of having to add this case to his current list; to him it's either a badly-botched burglary or a case of  “one body, four suspects–all sober and well-to-do,” as the detective working for Szacki puts it.  Yet  the more Szacki  investigates, the more he comes up with things that just don't fit right and which create more questions than answers:


"Why was this happening to him right now? Why could there not be one single ordinary element in this inquiry? A decent corpse, suspects from the underworld, normal witnesses who come to be interviewed by the prosecutor with fear in their hearts. Why this zoo?"


Meanwhile, in the process of trying to fill in the holes, what he doesn't know is that there is someone taking stock of his every move.

Szacki is one of most realistic characters I've come across.  He's extremely believable as a person, with flaws like every human being. Although he loves his wife Weronika, he starts focusing on things like her double chin and the growing fat around her middle, the way she wears the same t-shirt to bed every night, washed only once a week and some other shortcomings that lead him to wonder if this is his future.  His thoughts about his career are much the same.  He is an ardent believer in truth and justice, yet he is often torn between his "human conscience" and his "civil servant conscience," both of which frequently clash. But he's also capable of some very poor choices, including a flirtation with a reporter that goes a little further each time they're together.  And while Szacki is the main character, the other characters are just as credible, all free standing and real, described both in terms of their physical selves as well as their own quirky behaviors. Take, for example, Kuzniecow,  the cop working for Szacki who has sex on the brain pretty much 24/7; the obnoxious psychobabbling psychotherapist Cezary Rudski, the head of the group at the session the night Telak died; the strange pathologists who make odd quips while they're performing an autopsy; a retired police captain living in a roach-infested apartment with no electricity; a dying historian whose short career has been devoted to studying Poland's secret police; and also Szacki's boss, Janina Chorko, a very ugly and lonely woman who "gave the lie to the theory that there aren't any ugly women." She is actually  "the last person on earth he'd want to flirt with," making him tense as he prays he never gets an invitation to join her in a glass of wine and a chat. Chorko


"consciously made herself sour, malicious and painfully businesslike, which was in perfect harmony with her appearance, turning her into the archetypal boss from hell. The new prosecutors were afraid of her, and the trainees hid in the toilet whenever she came down the corridor."

The punch and pizazz he invests in his characters to make them believable also follow suit in the overall writing throughout the book; they keep the action moving, and there are places where you can't help but smirk at Miloszewski's insertion of wry humor.  But there is nothing at all funny about this story, where the tension grows not only in terms of Szacki's personal life, but in the murder investigation as it moves toward an incredible ending, as it dawns on you that even in a free society, being free and unfettered may just be a mirage.

Super book, one I definitely and most highly recommend.  I don't believe I've read anything like it before.  If you want a crime read well above the norm, something utterly sophisticated, this is the one.