A newcomer to the Jack Irish series by Peter Temple,  a couple of days ago I finished the first novel Bad Debts, became instantly hooked and slid right into the second, Black Tide.  Number three, Dead Point,  is winging its way across the Atlantic as we speak. Heck, I probably should go order #4, White Dog, while I'm thinking about it.  With only a couple of issues regarding Black Tide, I really like this series so far, and I love the writing.

Set mainly in Melbourne, once a criminal lawyer, Irish is now making his way out of a dark period of life that he drifted into after the death of his second wife who died at the hands of an unhappy client.  Trying to deal with his pain, Jack drowned his sorrows in alcohol and became a collector of "serious debts," as well as a gambler betting on the ponies. He does some odd work for a couple of men in the horse racing business. But there's another side to Jack -- as a sort of therapy, he also helps a friend make furniture, finding a bit of peace and pride in his work, and he has a huge heart. He's a dad to daughter Claire.    He tries to stay on the side of law and order, but there are moments when he sometimes has to cross over that border.

As the novel opens, Jack checks his answering machine to find a number of messages from a client, Danny McKillop, who Jack once defended in a hit and run accident.  He pleads with Jack to meet him, but Jack doesn't remember him at the time and the last message was left a couple of days earlier.  Now curious, Jack digs into the case files, where he discovers that McKillop had been accused of the death of Anne Jeppeson, a young activist some ten years earlier. McKillop had pleaded guilty after a witness positively ID'd him as the driver of the car. McKillop had pleaded guilty and received ten years for his crime. Now out, it seems that he really wants to talk to Jack.  As Jack pokes around, he starts thinking that perhaps McKillop wasn't the one behind the wheel; little does he know that he is opening a veritable Pandora's box of an investigation, helped along by a gorgeous journalist named Linda Hillier. It isn't long until he discovers that someone is willing to kill to keep Jack from getting to the truth.  In a story that is part hardboiled noir with added bits of action-packed conspiracy thriller, Jack has to navigate between bullets, explosions and a host of shady people to get to the truth. The problem is that Jack has no idea who to trust.

My first experience with Peter Temple is with his The Broken Shore, which I loved and which has much more of a literary feel to it than does Bad Debts.   Having said that, Bad Debts really kept me on my toes and kept my brain engaged trying to figure out the 10 year-old mystery of Danny McKillop.  And while I'm normally not a huge fan of the fast-paced variety of thriller/conspiracy novel, this one I liked, not only because of the writing in which Temple has crafted a very tightly-woven and controlled story despite the number of crazy twists and turns,  but also because of the characters, especially, but not limited to, Jack himself.  Rarely do I like a first series novel this much, but I was sucked in from the beginning and just couldn't let it go.

Moving on, the second novel in the series is Black Tide, another noir/conspiracy/action-packed combo set mainly in Melbourne. 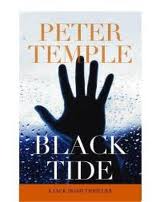 In this second installment, Jack Irish returns to do a favor for an old friend of his father, Des Connor.  Des shows him pictures of his father and mother, and regales him with stories about his father, the dad Jack grew up not knowing.  Des also has a son, Gary, and loaned him some sixty grand which Des now needs back to repay the bank for a mortgage Gary took out on the home, where Des now lives.  If he's not able to pay the bank, Des will be homeless; Gary defaulted leaving it up to Des to clean up the mess.  But Gary seems to have disappeared, and bighearted Jack decides to go find him to get the money for Des.  As was the case in the previous novel, Jack's search for the missing Gary leads him into a very messy and complex situation -- this time involving money laundering, other missing people, hush-hush organizations and once again, finding someone to trust is becoming harder and harder.  While Jack tries to get to the bottom of Gary's disappearance -- no easy task --  Linda has moved on to Sydney, where she has not only a new job, but apparently a new man, leaving Jack wondering about any kind of future with her.

As with its predecessor, Black Tide not only takes on a complicated tangle of shady operations that keep you guessing as to who's trustworthy and who's not, while the author manages to keep his well-crafted plot under a great deal of control.  Temple holds the reins tightly as the disappearance of one man slowly begins to branch out into even more nefarious dealings, so that everything that Jack uncovers fits into the main plotline without going off into tangents.  The author also weaves in different facets of Melbourne's population, from the very wealthy who prefer that the tradesmen use the back entrance to the aging Aussie rules football club fans who've lost their local team, to people who buy sandwiches on plain white bread, no focaccia sold here.  The problem with this book is that in terms of the basic setup, it's much like Bad Debts, but sadly I can't disclose why without giving away important details.  Let's just say that there seems to be a pattern that follows from book one to book two that made it easy to figure out something important;  I'm hoping that with book three the author will fall out of that trap and move on to something slightly different. All the same, even with this most annoying matter of personal contention, Black Tide managed to hold my interest to the last action-packed minute and beyond.  Considering, as I said above, that I tend not to like this sort of fast-paced rockem-sockem type thing, I'm drawn to the main character and his immediate circle enough to where I can't help but want more.

I can definitely recommend both novels -- the plots appeal to the mystery solver in me, and the writing makes these books intelligent reads that don't fail to engage. 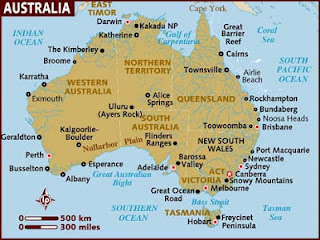 *part of this month's focus on novels from Australia.
Posted by NancyO at 4:16 PM