Black is back -- with Holy Orders, the latest Quirke novel 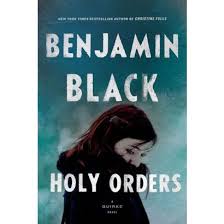 Thanks to Librarything's early reviewers' program, I received a copy of this book from the publisher -- my many thanks!

Black (the pseudonym of John Banville) is back with installment number six in his Quirke series, and before I launch into what I think about this novel, just a quick announcement: Gabriel Byrne is the BBC's Quirke in a new television series, which I'll be eagerly awaiting here in the US when it decides to come our way.  Click here to get a  sneak peek, thanks to byrneholics.com. Now back to his latest book, Holy Orders, which has just been released here.  In this book, along with the five others in the series (Vengeance being the one just prior to Holy Orders),  the crime and its solution are not really the novel's central focus -- it's really  Benjamin Black's high-caliber writing and especially his characterizations that keep me reading and waiting for the next series installment.  Black is truly one of the most literary crime-fiction writers out there with a knack for establishing an atmosphere of time and place; he is also able to get his readers into the heads of his characters from the very outset and keep them there throughout the story.  In terms of literary crime writing, the Quirke series is my ultimate favorite.

A trysting couple take a walk along the towpath by a canal and see a body wedged in between the canal wall and a barge.  The Guards are sent for, and it isn't long until the body winds up in Quirke's morgue at Holy Family Hospital.  Quirke doesn't see it until the next morning, and when he pulls back the sheet, he is surprised to find the body is that of Jimmy Minor, a reporter for the Clarion and friend of Quirke's daughter Phoebe.  Minor had suffered severe beatings before being dumped into the water.  The case is inspected by Inspector Hackett, who enlists Quirke's help.  This setup is nothing new;  Hackett and Quirke have teamed up before.  A clue surfaces early during a search of Minor's apartment, a letter from the Fathers of the Holy Trinity in Rathfarnham, but just why Jimmy wanted to talk to one of their priests is a complete mystery.   At the Clarion, Jimmy's editor remembers that Jimmy had recently been to Tallaght on a trip in connection with a local group of Tinkers (Irish Travellers).   In the meantime, Phoebe, who thinks she's being followed, gets a surprise of her own from Jimmy's past.  As Quirke investigates, he has to deal with his own issues, most importantly, his health, both mental and physical.

The action takes place in 1950s Dublin, where it's always raining and where the Catholic church controls pretty much everything. The press is no exception; here, for example, the Church resorts to a "belt of the crozier," a form of financial blackmail, to keep unwanted stories out of a newspaper.  It's an Ireland


"hidebound by rules and regulations formulated in the corridors and inner chambers of the Vatican and handed down...as if graven on tablets of stone."

As Quirke tells Phoebe, it's a place of two worlds, the one that he and Phoebe and "all the other poor idiots think we live in, and the real one, behind the illusion," where people behind the scenes run and control things, "keeping the meat grinder going." Quirke realizes he has a foot in each world -- in fact, throughout this novel there is a lot of duality -- twins, reality and hallucination, city people and country people, clergy and everyone else, heart and soul, past and present.

As always, Black's characterizations are intense, especially with Quirke. He's always dealing with people telling him how uncaring, cruel and cold he is, but for one thing, he can't shake his past, "where he had been most unhappy."  As the investigation progresses, and Quirke finds himself at the home of the Fathers of the Holy Trinity, he realizes that the past abuses he'd suffered, "body and soul," do not allow him to think "calmly or clearly" when it comes to the clergy.  For another thing, he's worked with the dead long enough, having "sectioned them out and delved into their innards," wondering now if he'd chosen his profession to get nearer to "the heart of the mystery," a secret which ultimately the dead do not yield.  While Quirke waxes existential about being and not being, daughter Phoebe is also struggling with her own emotions and comes into her own as a real person.

What I really love about this entire series of novels, and what is made very much apparent in Holy Orders, is that the crimes take a back seat to how they affect everyone left behind in their wake.  Black wanders through everyone in Jimmy Minor's orbit, exploring the newspaper where he worked, the people investigating his death,  his friends, his family, etc., all converging into a photo of sorts of a specific time and place that Benjamin Black portrays so very well with his writing. I love his use of natural imagery & symbolism  (plants, birds, water) throughout the story, and the atmosphere he creates is sustained until the very end.  The issues he writes about that take place in the 1950s are also relevant in our modern world -- but I'll leave you to discover what I mean.

The Quirke series as a whole is excellent; Holy Orders continues that trend.  It takes the normal flow of the series and adds something different to it.  I can't say what goes on here in too much detail, but once you read it, you'll understand why.  I will say that this book is definitely not a  mainstream novel of crime fiction for a number of reasons -- most especially the characters, who, for the most part, are complicated and if you haven't read the earlier books in this series, starting here is not a good idea. It also trends more to the literary side rather than to straight-up crime writing, a style that may not be to other crime readers' tastes.  However, I can definitely say that if you want something way out of the ordinary, you will certainly get that in the books by Benjamin Black. 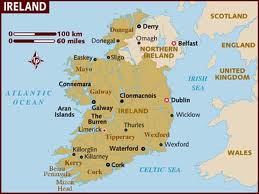 afterthought: I bought a real copy for my home library, so if you live in the US and would like this ARC, it needs a home! I'll pay to get it to you.