a most enterprising new crime author from Scotland: The Cabinetmaker, by Alan Jones 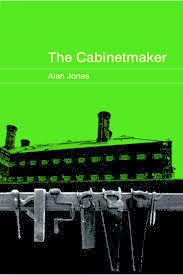 Last month before the holidays I received an email from a writer in Scotland who wanted to know if I'd read/review his new book, The Cabinetmaker.  I bought a copy, but things got pretty hectic here as usual at Christmas, I went to California after the New Year, and then came home and proceeded to get a serious case of the flu until this week. It took me a month to get to it, so I owe the author, Alan Jones, a huge apology for taking so long.

Before launching into the novel, though, I have to share  an article written in November that illustrates exactly how enterprising Mr. Jones really is in  getting the word out about his book.  It seems that rather than pop a few corks to celebrate, the author, along with a few others, set up a few tool benches and started making cabinets on Perth Road in Dundee.  He and his friends handed out flyers about his new book, did a little music making and dancing, and a great time was had by all.  Seriously -- if I ever get the notion to write a novel, I'd be much happier celebrating its publication the way this guy did -- no foo-foo flutes of champagne, no little trays of canapés being taken around by waitstaff -- I'm impressed.  I also love his attitude.  As quoted in the article I linked, the author says


"I'm an optimist but I've got my feet on the ground. If something comes of it then it's a bonus but it’s the satisfaction of writing it that compelled me to do it."

And now - The Cabinetmaker.

In 1978, Francis Hare lost his son Patrick when a gang of street toughs beat him severely and then left him for dead on the street.  John McDaid, "the most junior member" of the CID team at Partick Police Station, met Francis when he'd come in to check out how the investigation was going.  He was actually embarrassed when another cop gave him a cup of tea and about a paragraph's worth of explanation before sending him on his way.  McDaid felt badly about how Francis had been treated, but he's the newbie so he can't really say anything.  As time passes, though, McDaid strikes up a friendship with Francis -- both share a love of soccer and McDaid becomes fascinated with Francis' occupation: he builds beautiful, handcrafted furniture. The police have been pretty worthless when it comes to trying to pin Patrick's  murder on the street gang; but between McDaid and another cop with a heart and soul, Andy, they try to keep Francis informed.  Suddenly, though, things go very wrong for the police after they start to get "confessions" and the case goes down the toilet, leaving a father without any sort of justice for his son.  The case just sort of folds into obscurity, but suddenly picks up again in a big way  after a couple of decades go by -- and that's when things begin to get very interesting.

Considering it's a first novel, The Cabinetmaker kept me turning pages without finding a lot of the usual mistakes fledgling writers often make.  Let's do away with the niggles first, shall we? While I can appreciate a) that the author wants us to view McDaid as person outside of being a cop, and b) his own personal love of his craft (go back to the link where he's building cabinets on the streets of Dundee) the many pages featuring soccer and cabinetmaking often (imho) went on too long, sort of detracting from the tension.   At the same time, he's in fine company here -- I felt exactly the same way about the ongoing furniture-building scenes in Donna Tartt's The Goldfinch.  On to what I really liked about this book: the twists.  Just when you think you know everything, something happens that causes you to change gears midstream and rewire your brain to try to refigure it all, until another twist or two or three hits and well, I can't really say  more or I'll give it away.  Suffice it to say that armchair detectives like myself will find the book's plot and its unraveling  intriguing.

While this book's main focus is on justice, it is also a good police procedural where  things change in the police departments over time, from  the  late 70s and  the same sort of cops you'd find in David Peace's The Red Riding Quartet, on into the 21st century where things have become much different. It's a book well worth reading, and I do hope people will take notice and this book will do well so I can look forward to reading something more by Alan Jones. And it's less than four dollars on Amazon right now! I've become even more picky in my crime reads than normal lately, hence the long hiatus between posts -- but I wouldn't hesitate to read anything this author might write.  Definitely recommended.