Nesbø in the news AND his new book, The Son

I'm sure everyone probably already knows this, but I was delighted to see (according to this article ) that Jo Nesbø's book The Snowman is slated to become a movie.  Personally, that's a movie I'd actually pay to see, but of course, that's if it doesn't get screwed up in the translation from page to screen.  I understand the limits of adaptation but let's face it: many a good book has been totally messed up after becoming a movie.  Maybe if Larry (my spouse) goes to see it when it comes out, it will make him want to read not only Jo Nesbø, but other Scandinavian and foreign crime.  Right now, no matter how much I go on about a crime novel I really liked, he won't pick up anything but home-grown or British books, saying that the foreign names confuse him.  I'm sure he notices the eyeroll I give him in return.   So anyway, the movie is something to look forward to.

And now, for Nesbø's newest venture: 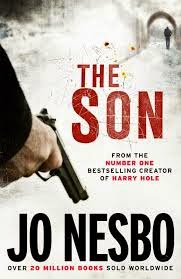 hardcover (UK)
(US edition slated for release May 13, Knopf)

As so often happens, I can't wait the extra time for a book by a favorite author to be released in the United States, so I turn to the UK. More expensive, yes, but I've had this bad boy pre-ordered for months. I love  Jo Nesbø, started reading his books way before he became popular here, and I'm still miffed about people comparing him to Stieg Larsson. Not even close! I liked Larsson's books, but Nesbø is in a class of his own. There are only a handful of Scandinavian writers whose books I still read and Nesbø is definitely in the top tier.  Does his new book match the level of awesomeness of his others? Why, yes it does!

For one thing, Nesbø is the master of twist. He is also the best at keeping my innards tied up knots while I'm reading, hoping everything is going to come out okay for the characters I've grown attached to.  In this newest book, that trend continues. He's one of the very few authors who can write a nearly 500-page book and make it go so quickly that I surprise myself after each day's reading as to how far I've gone.  He's also one of the very few authors that can take a bad guy and before the book is through, have me rooting for him all the way.  Well, at least that's the case in this newest book, The Son, which, in case anyone is wondering, is not another installment of  the Harry Hole series.  This one is a standalone which means that if readers haven't got through Nesbø's  series books, it's okay -- relax -- no need to rush. But do read them if you haven't.

The Son is a fast-paced tale about justice, revenge, redemption, and longstanding secrets that find their way into the present. The story  begins in a prison cell, where prisoner Sonny Lofthus is doing time for a number of crimes he didn't commit.  He has an arrangement: he confesses to crimes in return for heroin to supply his drug habit, his way of coping with the suicide of his father, policeman Ab Lofthus, whom he admired very much. Sonny is  a man with a "blissful Buddha smile," and someone to whom the other prisoners can turn to for "confession," preferring Sonny over the prison chaplain:

"It was the silence. the beckoning vacuum of someone who simply listens without reaction or judgment. Who extracts your words and your secrets from you without doing anything at all."

When the chaplain enters Sonny's cell one day to tell him about another murder that he'll be taking the rap for, Sonny's on board. But things change in an instant when another prisoner, dying of cancer, enters Sonny's cell and tells him that his father's death wasn't a suicide, but a murder. The prisoner tells Sonny that the suicide note left by his dad was a deal he made with his killers: in return for leaving the note, Sonny and his mother would live. Now Sonny wants revenge, and after escaping from prison, sets out to take it.  However, the murder of the prison chaplain and the murdered victim whose death Sonny was ready to take the rap for of course cause the police to intervene -- and when other people start dying, Chief Inspector Simon Kefas and his trainee Kari Adel of the Homicide Squad in Oslo start looking for connections between the deaths, and ultimately find them. That's all I'll give way for plot because I don't want to wreck it, but the story takes a number of strange twists and turns until ultimately old, long-buried secrets slowly rise to the surface leading to some incredibly gut-twisting moments and tough choices to be made throughout the novel.

I am one of the pickiest crime readers I know, and  I absolutely loved this book. It's one of those stories where I found myself rooting for the bad guy even though he leaves several bodies in his wake. At the same time, the actions of the "bad guy" in this book have to be measured against others who are truly evil -- and as always, Nesbø manages to create some absolutely nefarious, totally repugnant villains.  But the motivations of pretty much all of the main characters come under scrutiny at some point, even the so-called protectors of the peace, proving that there are some matters that cannot be measured in categories of black and white, good or bad. As the novel progressed, I couldn't help but want Sonny to make it -- to escape the cops, to do whatever it takes not to end up back in prison, or worse.  I don't normally take a killer's side, and I do like to see justice done, but as readers will discover, here  it's all a  matter of relativity. I can't explain it without giving things away,  but justice becomes sort of a floaty term in this novel.  There is definitely a lot of violence here but  Nesbø fans will probably be expecting this; there are a couple of personal relationship subplots that do not interfere with the overall action but rather enhance it, and overall, it's just a super terrific novel that I hated having to put down each time real life called.  My only real niggle has to do with Nesbø's decision to insert a character who lives across from Sonny's family home ... the scenes that this character were in just didn't do it for me.  Even though it is through him the reader gains some valuable insight, I think things could have been handled better and differently.  But even so, although this caused  a slight flow issue for me, overall the book is one that any serious Nesbø fan should definitely not miss --the action, the mystery at the very heart of it all, and Nesbø's excellent storytelling all win the day and come together in a truly outstanding crime novel.

I cannot recommend this book highly enough -- I'm just sad that people here have to wait another two weeks to get their hands on it!