two reads on the existential plane: Savage Night, by Jim Thompson and The Panda Theory, by Pascal Garnier

I'm sort of inundated with family for the rest of the month so I don't have time for my usual chatty reviews, but I've finished a couple of good ones I'd like to pass along.  Actually, I don't really have time right now to even post a review, so here are the titles:

First up there's Savage Night, by Jim Thompson, one of the darker books I've read this year and really geared toward fans of said darkness and noir;

and then something a little less dark than Savage Night but still not light, The Panda Theory, by Pascal Garnier: 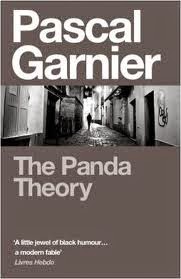 The cover blurb that says "A little jewel of black humour..." is not wrong, but I'd call it more on the bleak side. The Panda Theory is from Gallic Press, an imprint I've just discovered, and I liked it so much I now have four of their novels by Garnier.   Another one recommended for fans of literary darkness.

I have family here through the 30th so there's no time to read, much less update my reading journal, but I really want to talk about both of these novels so I'll table the discussions until later.