back to my old tbr pile with Angelica's Smile, by Andrea Camilleri


"The game cositts o' doin' a most damage y'can do to the apposing couple, who'd be the avversary, bu' also trying' a proteck y'r own partner from danger." --- Catarella, 226.

It is so nice to finally get back to my original big giant pile of crime fiction novels  that have just been sitting here stagnating for what seems like forever. And what a way to start, with one of my all-time favorite crime novelists, Andrea Camilleri.  Angelica's Smile is seventeenth in Camilleri's Montalbano series, with what seems to be four still yet to be translated into English.   As usual with these books, the focus in this story isn't so much on the crime or the crime solving,  but instead on Montalbano and the people surrounding him. This one is a little more on the personal side, with less reference to the social, economic and political issues that Camilleri usually brings to his work.

Our beloved inspector is now just two years short of sixty, and as in the last few books, he continues to muse about aging and growing older throughout the novel. He's still with long-time girlfriend Livia, and as the story opens, she is at Marinella with him for a few days.  As he's worrying about someone named Carlo she mentioned while talking in her sleep, and getting more upset by the moment, he is called to the scene of an odd burglary.  The couple that was robbed had been at their seaside home, where they'd awakened at six a.m. only to discover that they'd been "knocked out with some sort of gas," while the burglars "had the run of the place."  It was their anniversary, and they were entertaining each other at the time, so neither person heard any sort of break in.  Among a long list of valuables taken from the seaside house, the thieves stole their car and then proceeded to rob their regular residence. The only people who knew that the couple were going to be away were fifteen of their friends. As things turn out, there had been another burglary, "an exact duplicate," just three days earlier - and it isn't too long before the same thing happens again. When Montalbano is called out on yet another, he meets the titular and beautiful Angelica, the victim and also the "spitting image" of a woman he used to lust over as a teen in  Dore's illustrations of Ludovico Ariosto's 1516 work Orlando Furiosio, a  "poem about war and love and the romantic ideal of chivalry."  After seeing her for the first time, he's immediately swept off his feet -- and definitely attracted. 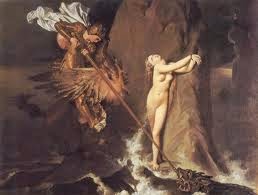 But even while he's mentally and physically lusting after his Angelica, as well as playing the role of her rescuer, there is still a number of crimes to solve -- including a murder -- and as an added distraction, the mastermind of the crimes is taunting the police, and then there's Livia, of course.

While it's pretty funny to see Montalbano as a loopy, lovesick puppy completely smitten by this reincarnation of  his teenage fantasies,  and while Camilleri continues his long-standing tradition of inserting colorful characters into the mix, let me offer a word of warning here as far as the crime solving goes. I made the huge mistake of going to Sartarelli's notes in the back re the poem Orlando Furioso (a natural inclination),  and twigged the entire plot all at once. Not the why of it, mind you, but trust me - if you read carefully, it's all there metaphorically speaking.  I figured out much more than I should have at an early stage, and ended up being disappointed, and that's not an adjective I generally use when it comes to this series of books.   And then there's this: I'm wondering if the author is getting a little tired -- this book just didn't seem to have the same oomph as his earlier Montalbano adventures that have been so lively up to this point. Still, it's a fun read, and in that vein I have to say that I probably haven't had so many good laughs with any other crime fiction series as I have with this one.  Like I've said before, you don't read Camilleri's novels for the crime -- it's all about the characters.
Posted by NancyO at 5:58 PM