"Snow noir?" Sheesh! The Winter of the Lions, by Jan Costin Wagner

Well now, here's a moniker I've never seen before: the short blurb by the Financial Times calls this book "snow-noir."  There seems to be a noir for everything these days, a concept that doesn't really sit well with me but that's another story so we'll save it for another time or I'll just get myself all worked up.  The Winter of the Lions is third in a series set in Finland, featuring Detective Kimmo Joentaa whose wife has passed away and who finds it hard to move away from his grief. There are two central mysteries in this book having to do with a series of crimes that hits close to home for our grieving detective and a third, more peripheral puzzle which centers around a strange woman who latches on to Joentaa shortly after meeting him at the police station on Christmas Eve.  When all is said and done, The Winter of the Lions turned out to be a dark, haunting read that kept me turning pages during an all-day readfest.

Just briefly, because it's difficult to talk about this book without giving too much away,  Joentaa and his colleagues are called to the scene of an horrific crime, involving someone close to the squad.  The forensic pathologist has been brutally murdered while out cross-country skiing. While coming to terms with his death, the detectives soon find themselves with another victim on their hands, a man who makes puppet models of corpses for television and movies.  In both cases the clues are virtually non-existent; it is only through a chance remark that Joentaa reveals that both victims had been together as guests on a popular TV talk show.  After reviewing a DVD of that particular episode, Joentaa and colleagues are no closer to finding the killer, but it does give our angsty, grief-stricken detective a line of inquiry to follow.  Mystery number two, which is written quite well, involves an unidentified someone known only as "She." Her story is revealed slowly until the full weight of what's happened to her comes down on the reader like a ton of bricks. Mystery number three is, as I said, sort of peripheral to the main events of this novel, involving a young woman who first encounters Joentaa on Christmas Eve while reporting a rape. She refuses to give up any details except the name of the guy who did it and eventually walks out of the station in frustration, only to show up at Joentaa's doorstep the next day, basically moving into his house.  All three of these plotlines weave together into a very slow-burning mystery which, once things start to unravel, turns into a dark and haunting story that examines the effects of grief and loss, also pointing to the ways in which people cope. 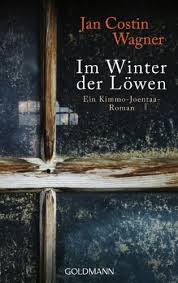 One reader review of this novel notes that he/she didn't understand why Joentaa didn't figure things out earlier than he did, a question I normally find myself asking in many a mystery novel, but this time I'm going to disagree with that opinion. The pacing in this book is slow for a reason, and in my opinion, very well executed.  Even though his wife has been dead for some time, Joentaa continues to exist in a sort of haze, reminded of her last days at every turn.  Not only that, but our detective has other things to worry about -- the strange young woman staying at his house, a colleague who is up to his ears and in denial about his gambling problem, and a few other distractions.  There are many other things about this novel that, in my opinion, speak highly in its favor, but the high believeability factor (okay, I know that's not a real word but I like it) of the characters and the slow-paced investigation and final reveal combine to make this book pop.  I will say that I am a wee bit tired of angsty cops -- does every detective in Scandinavia have emotional/mental  issues?

Confession time: normally I'm a series purist, and while I do own Wagner's first two novels in this series Ice Moon and Silence, they've sat unread on my shelf for a long time due to a personal need for a Scandinavian crime reading hiatus. The thing is though that the author does such a good job in covering Joentaa's backstory here that it is unnecessary to have read the previous books. Obviously, I would have preferred to have been more prepared characterwise, but not reading the other series entries wasn't detrimental to my understanding  and appreciation of  this book.  Actually, the truth is that even with the angsty detective, The Winter of the Lions turned out to be a fine read -- something very different than its competitors in the world of "snow-noir," and one I'd definitely recommend.
Posted by NancyO at 9:51 AM