* back to the movies we go: No Orchids for Miss Blandish, by James Hadley Chase 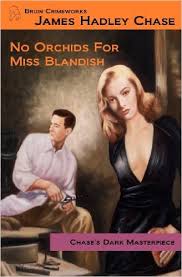 After finishing this book, I went back to the front pages where there is a "note to the reader."  There I learned that this edition "is yet a further update for the latest generation of readers," and I was appalled.  I thought this was a new publication of Chase's original novel, but no.  It's been revised.  So here's my question: if people in "the latest generation of readers" pick up this book, knowing that  was originally published in 1939, why in the hell would they need an "update"? Also published in 1939: Steinbeck's The Grapes of Wrath -- does that now need an update to make it  more appealing to "the latest generation of readers?" I think not, she says.  But the story continues, since in my quest to discover the actual text from 1939, I read three more versions of this novel before finally finding the original.  One version even had televisions in it!  The horror!  And, as if that wasn't frustrating enough, I then watched two film versions of this novel -- the original "No Orchids for Miss Blandish," from 1948 which made me want to launch things at the TV, and "The Grissom Gang," another adaptation of  this book, from 1971. That one was almost okay in terms of following the novel, but on the whole, for me sort of missed the boat coming down to the ending.  Frustrating experiences all around.

The book, though,  stands as a  monument to bleak, raw, and downright depressing crime fiction  -- anyone expecting to find any amount of happiness in this book is definitely not going to want to read this novel.  I think I was in shock by the time I turned the last page, but, actually, overall I thought it was great.  No sappy sentimentality or smiley happiness here, none at all. Zero, zip nada.

When a gang of crooks kidnaps an heiress in the process of a botched robbery,  their dreams of easy money are thwarted when a rival and much tougher, more deadly gang steals their victim. Miss Blandish becomes the hostage of the Grisson Gang, led by Ma Grisson.  Ma (likely modeled after the infamous Ma Barker), has "for the past three years ... built up the reputation of the gang," but among other gangs, the Grissons were  still viewed as "good third-raters."  She knows that the kidnapping of Miss Blandish would turn the gang into "the richest, the most powerful and the most wanted public enemies of Kansas City," building its clout -- at the same time, the half million the Grissons will be getting from Miss Blandish's wealthy father is also nothing to sneeze at.  However, complications ensue when her son Slim takes a shine to Miss Blandish and wants her for himself.  Slim, who used to torture animals for fun as a child, began to "develop homicidal tendencies" by the age of eighteen.  The only person with any amount of control over Slim is Ma, who "won't face up to the fact that he isn't normal," since she is "blinded by a mother's love."  When Slim decides that he loves Miss Blandish and won't give her back, things within the Grisson gang start to change.  Ma's not happy  -- she's jealous of Miss Blandish for one thing, and for another, she truly believes that "more gangs have come to grief through a woman than through the cops."  Just how prophetic her statement will prove becomes evident throughout the rest of the novel.  One the other side, the story follows the efforts of former reporter now private detective Dave Fenner, who's been hired by Miss Blandish's father to find his daughter.   That's all I'll say about the novel for now, except that this is one of the most raw, most twisted novels I've ever read, and despite the apparent misogyny found within this book (it was the 30s, after all, so I can sort of overlook it), I enjoyed it. 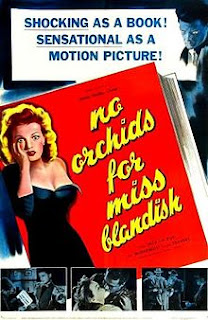 So - now to the films.  First, there's the original version, made in 1948, which, if I hadn't read the book before seeing the movie, I would have had trouble believing that the two were related. What really misses in this movie is that it comes across as some kind of strange love affair (and not of the Stockholm Syndrome variety, either) between Slim and Miss Blandish rather than a psychological story of a psychopathic captor and his captive.  I mean, seriously -- I was okay with it up until the point where Miss Blandish has the opportunity to walk away but she chooses to stay (a truly WTF moment) --  that's when it all went sideways for me, and it didn't get any better as the movie progressed. 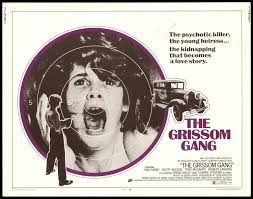 The second version, "The Grissom Gang"  (1971)  is a bit more faithful to the novel, even though the family's name is Grisson, not Grissom.  It's also much more true to the period (and with no British actors badly faking American accents); however, there are still some major changes that were made in the storyline.  The biggest one comes at the end, which fails (in my opinion) to capture the flavor of the originally ending of the novel, which was just downright pathetically tragic.  However, between the two movie versions, if someone's looking for the one which more or less captures the main thrust of the novel, this is the one I'd recommend -- the portrayal of Slim in this one was just brilliant, more or less the way I pictured him while reading the book.

Not for cozy readers, for sure, but any true pulp/vintage crime addict like me will want to experience this book. Once is enough, though.