*...and with great regret, we say goodbye to the 1860s: The Moonstone, by Wilkie Collins 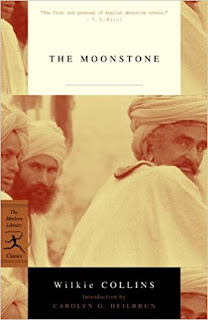 
"The detective-fever isn't easy to deal with..."

Anyone who has not yet read The Moonstone really ought to pick up a copy, not solely because is is considered by some to be "The first and greatest of English detective novels" (à la T.S. Eliot on the front cover), but more to the point, it is downright fun to read.  It's also another one of those novels I read as a teen when I caught a case of Collinsmania and made my way through everything he'd ever written that I could get my hands on at the time.  As I said to someone, although I read it as a teen, coming back to it, I realized that I hadn't really read it. Now that I have, I can't recommend it highly enough.

While T.S. Eliot's claim to prominence of  The Moonstone as "the first and greatest" of British detective novels may not exactly be the case [and especially not with Julian Symons, who in his Bloody Murder: From the Detective Story to the Crime Novel says it was definitely Charles Warren Adams' The Notting-Hill Mystery that was the first (51)],  Eliot was  "one of the genre's most passionate and discerning readers" and a huge fan of the author.  He said in 1927 that  "all good detective fiction  'tends to return and approximate to the practice of Wilkie Collins',”  an idea shared by Dorothy Sayers.  She not only referred to The Moonstone as "the most perfectly conceived and written detective story" of its time "or any other," but she also stated her firm belief that Collins  would continue to "exercise still more influence on [the mystery-story's] future development."   It was his "skillful construction of complex plots, his descriptive verbal painting, his attention to detail and accuracy, and his gift of characterization" that she admired, and I have to say that I completely agree.

The actual story behind the titular Moonstone takes readers back in time to 1799 with "The Storming of Seringapatam." The history of the diamond, which includes the mandate of Vishnu the Preserver that "three priests in turn, night and day, to the end of the generations of men" should be the gem's guardians, starts the story off with a sort of mysterious vibe in its own right. Then things take a more sinister turn: in a military action which leads to the death of Tippoo, the Sultan of Seringapatam who is presently in possession of the Moonstone, the diamond is stolen.  The thief is one John Herncastle, who took the gem by force, killing one of its guardians in the process.  The "dying Indian" manages to curse Herncastle before his actual death,  saying that

"The Moonstone will have its vengeance yet on you and yours!"

Mind you, we're only on page seven at this point, and it was here that I began to fall in love with this book.  Not only is this short history reminiscent of the beginnings of some of those old pulp stories I've read and enjoyed over the years,  but as Robert McCrum of The Guardian said in 2014,

"The theft of the Tippoo diamond after the fall of Seringapatam...connects every detail of the plot to the great imperial drama of India, the society over which Queen Victoria would eventually declare herself 'Empress'."

And as the story launches from there, those three guardians will return more than once, so through their presence, Collins also not only keeps the Moonstone mythology alive but also reminds us throughout that the Moonstone was not the rightful property of any of the British characters in this story.  As Stephen Knight says in his Towards Sherlock Holmes, the taking of the Moonstone "was a very disruptive act," and so the story provides a "highly liberal account, for the time, of how Indians, here the three patient noble Brahmins, might respond to English imperial depradations." (146)

The long and short of it is that the Moonstone had been bequeathed to Rachel Verinder by her uncle for her eighteenth birthday, and it was stolen that very night.  Our story begins in 1850 when the house steward, Gabriel Betteredge,  has been contacted by Mr. Franklin Blake, Rachel's cousin, who had been tasked with delivering the diamond to Rachel some two years earlier.  At the time of the theft the police had been called in, first Superintendent Seegrave, and then a certain Sergeant Cuff.  [As a very brief aside, Symons tells us that Cuff was modeled after the real-life famous Inspector Whicher,  the subject of Kate Summerscale's excellent book.] However, Cuff's inquiry was cut short, and the identity of the thief had never been revealed.  The relationship between Rachel and Franklin had suffered as a result (it's so complicated so you have to read it on your own to discover why), and now, Franklin has decided that


"the whole story ought, in the interests of truth, to be placed on record in writing -- and the sooner the better."

His idea is that


"We have certain events to relate...and we have certain persons concerned in these events who are capable of relating them.  Starting from these plain facts, the idea is that we should all write the story of the Moonstone in turn -- as far as our own personal experience extends, and no further."

Starting with Betteredge, then, we are taken through the story step by step, from the time the Moonstone came into the hands of  Franklin's uncle Herncastle fifty years earlier, to how it came to Rachel in Yorkshire, and then how it came to be lost, followed by events leading up to the unmasking of the thief and beyond.  Divided into two periods "The Loss of the Diamond (1848)" consisting of Betteredge's narrative, and "The Discovery of the Truth (1848-49)" with the stories of Rachel's cousin Miss Drusilla Clack (which I have to say would be a great name for a pet duck!), Solicitor Matthew Bruff, Franklin Blake himself, Dr. Ezra Jennings, Sergeant Cuff, and an extract from a letter from a Mr. Candy.   Finally, the book ends with an Epilogue and the finding of the diamond, where we hear from Cuff once more and two other characters involved in the story's denouement.  I love this approach, actually, and each character stands out fully as an individual in his or her own right.  It's such a brilliant way to paint a full picture of events and as the story continues, discoveries are made that tie present to past and vice versa.  Not only that, but it's the perfect English country house crime novel, sans murder, with a clever and ingenious solution.    I have to say that I loved every second of reading this book, and what makes it work so nicely is the combination of Collins' excellent plot and the vividness of his characters in relating their parts of the whole.  Collins also provides a bit of comic relief throughout this story; as just one example, I giggled my way through much of Miss Clack's narrative, and not just because of her name.

Let me just say that there is a  LOT happening in this book beyond and underneath the mystery itself,  but I won't go into any of that here because The Moonstone has been studied inside and out, upside and down, picked apart, analyzed,  and has provided many scholarly works that can be found on one's own.  I can see how it might frustrate a number of modern detective-fiction readers and seem a bit tedious at times,  but it had the completely opposite effect on me: every moment of free time I could possibly grab during a day was devoted solely to this novel. I will say that while I will always be a bit more partial to Collins' The Woman in White,  I thought The Moonstone was just brilliant.

thus ends my journey through the 1860s, although there were quite a few novels I didn't read that I will get back to some day.  What a great, great decade for crime/mystery/detective fiction!!!!

And now, just briefly, I watched two film adaptations of this book after finishing it.  The first, via Britbox (a streaming service I just love and have had since it became available here in the US) is a 2016 production of The Moonstone, told over five episodes.  I couldn't stop watching, actually, and while I'm a huge lover of period drama in the first place, this adaptation adhered nicely to the novel while making it entirely watchable.  I enjoyed this one much more than the 1997 version,  a 2-hour production which to me really didn't get to the heart of the novel as much as the 2016 adaptation was able to.

Both are very much worth watching for different reasons, although I ended up having to buy the 1997 version on DVD.

Read the novel first though, because as I said, it's just brilliant.
Posted by NancyO at 1:26 PM