Every so often I tend to overdo in my reading life, and that happened to me toward the end of 2017.  It's not so much the number of books I read, but more the intensity of what I read, and by the end of the year I was actually burned out.  Add to that a number of real-world stress-producing events here, and it was time for a mental battery-recharging, week-long vacation.  I took a number of books along, nothing too heavy, and this novel was included in the stack.  It was exactly what the doctor ordered -- an old-fashioned, old-style British murder mystery -- no sex scenes, no gratuitous violence, no overly-complicated plotlines -- just quiet, solid reading fun, a brain relaxer and mental palate cleanser before I start moving up the reading-intensity scale again. 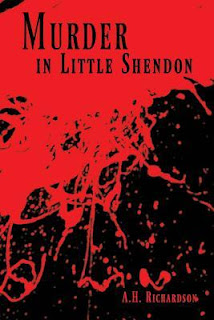 The victim in this case has left behind nearly an entire village's worth of people who may have wanted to kill him, so the story turns out to be an old-fashioned whodunit.  It seems that the now-deceased Mr. Bartholomew Fynche, who owned an antique shop called "The Bygone Era," had so many enemies that trying to figure out exactly who dealt the fatal blow that caved in his skull "fully an inch or two" is going to be a tough job for Inspector Burgess.  A phone call to his superintendent results in a pair of reinforcements: first, Sir Victor Hazlitt, whose eccentric aunt lives in the village and who knew the victim; second, Beresford Brandon, well-known actor with an "interest in criminology" whom the Superintendent feels may be of use to Burgess since people  in Little Shendon might open up to him.   Hazlitt stays with his aunt at her home while Brandon takes lodgings at the local village pub, where his job is to listen and collect gossip that might be helpful. It's an unlikely match, really, but it does seem to work, especially because Brandon has a way with people, some of whom in turn are awed by the fact that they're in the presence of a famous actor.  Between the three of them, they are determined to get to the bottom of this murder, sifting through witnesses, clues, and above all, Fynche's past to do so.  A second murder, however, complicates their task.

Since there are so many people who could have done the dastardly deed, Murder in Little Shendon moves very slowly through witness questioning and scenes between the characters that definitely have something to hide from each other and from the police.  It is, in fact, a very slow-burning kind of mystery novel in which the author takes her time so that by the time of the big reveal, we know all the secrets in this little village except, of course, for the biggest one of them all.   She also builds on the fears among the inhabitants of Little Shendon that it is indeed one of their own that has committed these two crimes, and how this knowledge affects all of these people living in this closely-knit village.

I have to say that I never guessed the identity of the culprit, which is always a plus; I enjoyed the slow pace of the story that offers time for thought in terms of my favorite pastime of armchair detecting, and many of the characters were eccentric enough to be invested in them.  On the other hand, while I was happy not to have guessed the who, it seems like the backstory of this character given at the end just sort of came out of nowhere without even the slightest hints being given anywhere else.   I found that sort of off-putting, but that's just a personal thing, since I have this need to sort of ferret out what sort of secrets lurk in characters' backgrounds through smallish sort of hints planted here and there that make for an "aha" moment when all is revealed.  Overall, it was a fine vacation mystery and I'm very happy to have had the opportunity to have read it -- as I said, it was absolutely what the doctor ordered: a slow-paced sort of throwback to the old-style British murder mystery with no flash, no gimmicks, no police angst, an unhurried pace, and plenty of red herrings. It would be perfectly at home on the shelves of cozy readers, for sure!

Thanks so much to Kelsey, and to the author for my copy of this book. It was just good, old-fashioned fun.
Posted by NancyO at 11:29 AM