*femme fatale indeed! The Sorceress of the Strand and Other Stories, by L.T. Meade (ed.) Janis Dawson 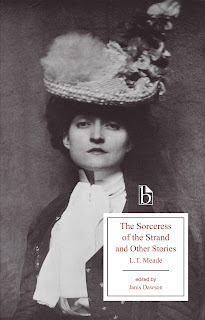 Over the last year I've read a number of older books featuring early examples of women in the detecting biz,  but no books that have focused primarily on women as villains. Irish writer L.T. Meade and her various writing partners  changed all that with their serialized crime stories, which feature some of the most diabolical women masterminds of evil who let nothing stand in their way of their evil goals.    Meade's stories ran in The Strand, and as you can from see from taking a peek at this website, her stories often found themselves alongside the Holmes stories of Sir Arthur Conan Doyle.  Sadly, while  Holmes and Watson continue to entertain, LT Meade has gone the way of several women writers, fading into obscurity.  She is largely remembered for her novels about school girls but is little feted in the world of crime/mystery fiction, which is a bloody shame, if you ask me.  Luckily I recently discovered her work in this book, fell in love with her evil-genius female criminals, and bought two more books by Meade in anticipation of hours of entertainment.

Before we even get to The Sorceress of the Strand, in this particular edition from Broadview Press,  we are  treated to stories from three other works by Meade. It's kind of like the amuse bouche before the main meal, if you will, and it certainly whet my appetite for more.   The first of these is "The Seventh Step," from The Diary of a Doctor (second series) published in The Strand in January, 1895.  Her co-author on this one was listed as Dr. Clifford Halifax, who actually narrates these tales, but whose real-world identity was actually Dr. Edgar Beaumont.  In this story, Dr. Halifax's adventure begins on a ship sailing to St. Petersburg, where his compassion and curiosity lands him squarely in the midst of a most sinister plot involving a female mastermind of evil. Of this story, I'll say no more, except that for me, it had a sort of proto-, old style pulp feel to it as the story unraveled.  The second story, "At The Edge of a Crater," finds Meade writing with  collaborator Robert Eustace, in what will eventually become (after being serialized in The Strand in 1898) the novel The Brotherhood of the Seven Kings.

Norman Head, who relates this story had, while in Italy some ten years earlier, "fallen victim to the wiles and fascinations of a beautiful Italian," a "scientist of no mean attainments," and because of her, became a member of the "Brotherhood of Seven Kings."  The woman here is a certain Madame Koluchy, who is, as the good people at LW Currey tell us,


"A Moriarty-like master criminal who is incredibly beautiful, intelligent and charming, and who commits extortion, blackmail and murder."

While she is feted in London as a "marvellous woman" who "has succeeded where the medical profession gave little hope," Norman knows the real Madame Koluchy as having "bewitched London with her impostures and quackery."   And now he finds himself face to face with her again as he must stop a diabolical plot that has been set into motion, one that will take him from the salons of London to Mt. Vesuvius.   Finally, story number three is "A Little Smoke," from The Heart of a Mystery (1901), which finds a certain Rupert Phenays set against his deadly but beautiful enemy Francesca Delacourt, who is the ringleader of a "most dreadful gang of spies."  Sadly, Phenays enjoys no peace; he is on the run from Agents of the French Secret Service who believe him to be in possession of a "great secret" that he doesn't actually have.  All I'll say about this one is that dog lovers should beware.

Entering into The Sorceress of the Strand itself,  we come across the title character,  Madame Sara, who reads like an early example of  the femme fatale, one whose fame and  respectability grants her entry into the homes of some of the finest families in Britain. She is, as her arch-nemesis Dixon Druce puts it, "a very emphatic somebody,"  and has wedged her way into the lives of the upper classes to the point where "London Society is at her feet."  Madame Sara is also what I'd term an evil genius, who has a background in science, can wear many hats (including that of dentist), and labels herself "a professional beautifier" who "claims the privilege of restoring youth to those who consult her."   She is an exotic, mysterious figure who looks as though she's about twenty-five, but "confesses that she is much older than she appears."  She is also, despite her appeal,  one of the most nefarious and shady female evildoers on the streets of London, something her victims would deny until, of course, they learn the horrible truth about Madame Sara. Unfortunately for some of these women and their families, the light bulb doesn't quite go off until it's much too late. Druce teams up with a doctor/scientist friend Vandeleur, and together they try to thwart Madame Sara's crimes; they aren't exactly detectives but they are on scene as the mysteries behind Madame Sara's actions unravel, trying to thwart her evil intentions before the worst can happen.

Sure, you can find a number of Meade's stories online but you'd be missing out on Janis Dawson's incredible work in this Broadview edition, including her discussion of the real-life counterpart for Madame Sara, a Madame Rachel who "specialized in swindling money, jewellery, (sic) and family heirlooms from her clients."  We also learn that at least one of her victims accused her of "magnetic influence" and "witchcraft," and that she ultimately died in 1880 while in prison. She also touches on Meade's criminal masterminds and "Fin-de-siecle Anxieties" (which are writ large in each and every story in this book) and then offers several appendices, beginning with "Contemporary Interviews and Reviews."  I'm one of those strange people who loves to get what she can out of a book by knowing more about its social/historical framework as well as the life of the author, so for me, this was a perfect introduction to Meade and to her mystery/crime writing.

Having no idea at all what to expect when I opened this book, by the end of it I became a confirmed LT Meade fan and plan to get my hands on and read every single crime story she ever wrote.  And anyone at all who is interested in Late Victorian/Early Edwardian crime writing, especially stories written by women, should read her work as well.   Beyond her historical significance in the genre, I have to say that some of her stories often read like rollicking adventure yarns, perfect for reading on a rainy day, cup of tea in hand while curled up in a blanket.  Seriously -- she's just plain fun.