The Wolf and the Watchman, by Niklas Natt och Dag 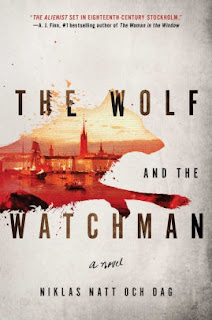 Now I'm only two weeks behind; I finished this book some time ago and I have to say I hardly moved while reading it.

Scandinavian crime novels are no strangers to my shelves. I've been reading them a very long time, well before they became all the rage at some point with the publication of The Girl With the Dragon Tattoo.  They can be bleak, dark, and in the hands of some Scandinavian authors, downright disturbing (a la Jo Nesbø's serial killer novels like The Snowman).   In more than one case Scandinavian crime  writers have also taken their characters delving into the past to understand what is happening in the present, and The Wolf and The Watchman follows this pattern.  As the back-cover blurb from Kirkus Reviews notes, it

"examines the effects of a brutal murder on those who investigate it - and explores the psychological causes for the crime..."

The story  is set in 1793, which also places it into the category of historical crime novel. while there's more than just crime here, it's not at all pretty -- the author goes all-out grisly in the telling, which sort of detracts from more than one of the underlying themes the author tries to bring out. More on this soon.

Set in Stockholm, the discovery of a corpse floating in what is known as "The Larder" (once a lake, now a dump for waste of every sort) brings watchman Mickel Cardell to the scene, and what he finds is that the body has been dismembered, with eyes and tongue gone as well.  When the body is more closely examined, Cardell understands that this was no afterthought -- it seems that these mutilations have been done over a long period of time, while the poor victim, who has now been named "Karl Johan" because he was once a human being,  was still alive. With only a couple of actual clues to go on, the chief of police asks attorney Cecil Winge to investigate, knowing that he will do so drawing on his "strength of mind."   The problem is that Winge is suffering from a horrific case of consumption, and his time is ticking down.  Along with Cardell, he starts by examining what little they have on the case, but some questions either get no answers or a door slammed in the face, as people in the know aren't talking.  As Winge worries that the two have "encountered a dead end," the story takes a turn backwards, and the solution to the mystery unfolds slowly in two parts --    first in the account of a young would-be medical student who has come to the city to study but who instead gets caught up in the world of amusements and entertainments until he hits rock bottom, only to find that he hasn't even scratched its surface;  the second told in the story of a young woman who ends up in a woman's workhouse, who faces her own horrors (and those of others), and thinks only of escape -- before returning to the present.

Reading through this book, I couldn't help but notice that there are a number of similarities between the way 1793 Stockholm is portrayed and what's happening in our own modern times; it's certainly not hard to guess that the author had this comparison in mind while writing this story. There is also an underlying thread running through this book that looks at the clash between Enlightenment  thought and the chaotic realities of life, both social and political.  But  reader beware -- while the ideas underpinning this book may offer the reader a lot to consider, their value is somewhat muted at times because it is hard to get beyond the gruesome events that happen in this book.  I've  actually seen this novel labeled as "horror," and in the case of one goodreads reader, "torture porn."  EEK!   Personally, I read a lot of horror but it's on the more cerebral side, meaning that I don't want to read about the gory details or go into any sort of suffering; I feel the same about crime reading.  Having said that, though, I made my own focus on the search for the killer and the  ideas here rather than the violence, reading through the more gross stuff very quickly; the story also has a plot that is not the usual predictable thing I can figure out long before I get to the ending, it's claustrophobic, atmospheric and to be honest,  there are many moments where the excitement had me on the edge of my chair.  Quite frankly, I couldn't help being sucked into this story, even while being repulsed by the grotesqueness of it all.

I sort of get why it's being compared to The Alienist, but this book is definitely not that, so don't go there. This book is darker than dark, it's not cozy material, it's not murder light, there is no happiness or light shining through anywhere here, and it's not at all for the faint of heart.   As far as a recommendation goes, some people seriously detested it while others really loved it. so it's one you'll have to judge on your own.