South of Evil, by Brian Dunford 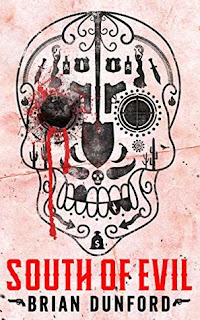 The blurb starts like this:
"Special Agent Walter Curtis finds drug dealers by the trail of money they leave. He followed the money and found a vicious cartel operating in secret across the border. But no one believes him."

Curtis is an agent with the IRS and he has really messed up as the book begins.  He had the perfect case nearly in hand, along with the arrest of a very powerful player named Edouardo Mendes.  He could have put away much bigger fish,  but  Curtis didn't quite fully do his homework and  the case he'd been working for years went completely south.  He's lost the respect of other agents who spent time and energy on the case, and his reputation is shot.    All is not completely lost though -- he can still make a case against his prisoner on related counts, and Mendes will still spend time behind bars.   Curtis knows that Mendes is the kind of man "who would be terrified of one night in prison," and he has a vision of Mendes granting him an interview and Curtis walking away with "seized assets, intelligence, and confessions," that would fix the mess in which Curtis now finds himself with his botched case.  Instead, Mendes offers up the story of three million dollars buried in the desert.  Together with his friend Marc Virgil, a Boston cop whose career is currently on the skids, Curtis decides to go into Mexico and find the money, which was, as the back-cover blurb relates, "hidden by a long dead drug lord."  But things aren't going to be that easy, and soon the two find themselves with targets on their backs as they make their way through the harsh Mexican desert.

While I'm not a regular reader of thrillers by any stretch (more on that below),  I am interested in what motivates people in books, and the author has obviously put a lot of work into building backstories and focusing on why his characters do what they do, and given that this is his first novel, he did it rather well.   As he noted in an interview, most of the people in this book have "serious moral flaws" that cause them to make "terrible decisions," and around that idea is where I kept my own focus, like I do in pretty much all of the books I read.    He also said that the people who make these really bad choices are  more interesting than characters who make good ones, and I found that to be the case here as well.    For example, Curtis has been "ridiculed" and "put out to pasture," after having "bet everything" and lost. He worked very hard and diligently on his case  and he is truly desperate to get the chance to prove he wasn't wrong and that he is "not a joke." His friend Virgil  has had a long career that went south after a "bad" shooting so basically he has nothing to lose.  And then there's the one cop in this book in a small station in Mexico who believes in his job and who joined the force for a reason -- he does what is morally right but in the end finds no reward for  his actions, in fact, quite the opposite.  The storylines of each of these people (and others) intersect eventually both present and past,  and reveal more than  a few unexpected surprises before coming to a downright twisty ending.

I was sort of hesitant about reading South of Evil since I don't as a rule do thriller novels with nonstop action.  The author was so nice though that I couldn't say no even though I did warn him that thrillers weren't my thing, and I have to say that it was a bit too much on the violent side for my taste.  If it is possible to cringe while reading, I think I did that, so  I'm probably not quite the intended audience for this book since it's  more likely to be enjoyed by people who prefer action-packed thrillers as opposed to  someone like me who prefers a gentler mode of crime writing.* I'm well aware that any book about a cartel will likely come complete with bent cops and hit men and that they're not going to be sitting around discussing the weather or good books over tea and cookies, so this is a me thing and not the fault of the author.  Currently this book has a 4-plus star reader rating on both Goodreads and Amazon, so evidently there are a number of people who regularly enjoy this type of story who find it a very good read.


personal ps/ to the author:  Thanks so much, apologies for taking forever, and finally,  the line at Franklin's can be about three to four hours on a good day, and you still have to hope that they haven't run out of food before you make it to the door.  But it's worth it.


*
And staying in tune with my more mild crime-reading preferences, and in contrast with the author's choice of narco skull for his cover, my choice of (henna) narco-style tattoo in May in Puerto Vallarta  drifted toward a skull with hearts for eyes and a hair ribbon. 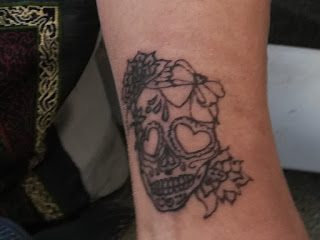 Email ThisBlogThis!Share to TwitterShare to FacebookShare to Pinterest
Labels: 2019, thriller/suspense