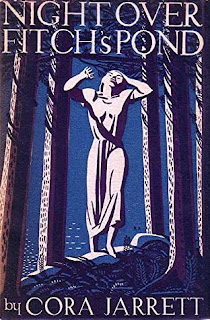 Houghton Mifflin Company, Riverside Press, 1933
292 pp
hardcover
"There's a moment in the history of any tie between human beings that settles for good the question of who's going to be top dog."
Night Over Fitch's Pond is number 24 on the Borges/Bioy list of mystery novels, and it is my introduction to author Cora Jarrett (1877-1969).  As a brief aside, I did read number 23, ECR Lorac's Black Beadle (1939), but it was a long while ago, I didn't really care for it all that much, and I was well behind reading schedule so I didn't post about it.  Oh well.  Things are FINALLY settling here at home (after what, two-plus years?)  so I'll just be moving on.
One particular thing I'm enjoying about going through the Borges/Bioy list of books is that  it affords me the opportunity to read novels I have never read before, and in this case, an author I'd not heard of before starting this project.   Cora Hardy was born in Norfolk, Virginia, and after studying at Bryn Mawr, The Sorbonne and Oxford,  she entered into what would become a lengthy teaching career and married Edmund Seton Jarrett in 1906.   According to a blurb about her book The Ginkgo Tree at Abebooks, she "began writing in her 50s,"  with Night Over Fitch's Pond  her first novel.  She would go on to write five more novels, a number of short stories and a play, and as Barrie Hayne notes in Reilly's Twentieth Century Mystery and Crime Writers , Jarrett's books are "deep probings into abnormal psychology" (Springer, 2015; 858), which is very likely one reason I liked Night Over Fitch's Pond as much as I did.
The novel begins as our narrator, Walter Drake, sits by the body of Julius Nettleton in a cottage on Fitch's Pond, "a small solitary lake of great beauty."  Reflecting back on events that led to Julius' death, his mind replays what had happened over that particular summer, looking for any kind of clues as to what might have happened out on the lake that caused Julius to die.
Julius and Mary Nettleton had first come to Fitch's Pond to visit their son George at a camp on the lake owned and run by a man named Maxon. They had discovered two abandoned cottages there, and Julius bought them both -- one for his family and one to be rented out.   Later, after the Nettletons had spent four summers on the lake, Julius had invited Walter to spend his summer at Fitch's Pond as a guest in their cabin.  Walter soon realizes that the Nettletons are no ordinary couple -- Julius, as he notes, wanted Mary to be  "a housemate only, a housekeeper, a serviceable kind of companion," while Mary had decided to "bear with humors of Julius."  Life at the Nettletons, both at home and at the lake, it seems, is built around what "Julius will want..." with Mary acceding to his wishes despite what she might want.  Walter, it seems, is also secretly in love with Mary but doesn't understand why she caves in so easily to what her husband wants. 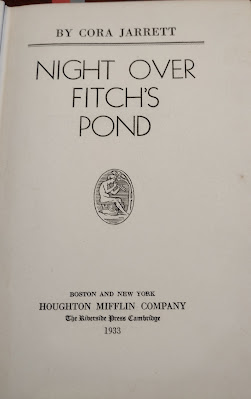 The real trouble begins when new tenants, Rolf and Eloise Deming,  move into the second cottage.  On first meeting Eloise, Drake comes to the conclusion (eventually proving correct) that Eloise would "go over the lot of us like a steam-roller," and secretly hopes that Julius would "get his proper come-uppance from this woman he had brought among us." He also realizes  that it would be Mary who "would pay," also a spot-on insight, especially when it hits him that Mary and Rolf had quietly fallen for each other and that Eloise knows.  Drake goes on to describe a  campaign of mental tortures inflicted on Mary by Eloise  taking readers to that "one fatal evening," which had "brought our whole precarious cardhouse of outward appearance at Fitch's Pond slithering and toppling down."   "Abnormal psychology" indeed -- there's a reason why Eloise is referred to as "an Iago in petticoats," but the one really deserving reader scrutiny here is Julius, as Drake spends that long night "laboring to plumb ... the bottomless dark" of his mind.
While reading, my thoughts often came back to a  passage I'd marked earlier in the novel where Drake is told by a friend that

There's a moment in the history of any tie between human beings that settles for good the question of who's going to be top dog,"

and without giving anything away, all I will say is that there is much more than a kernel of truth in that statement, played out right up until the end.  To say much else would be criminal; in the long run, while Night Over Fitch's Pond  may not be a typical mystery story,  after the first few slow-ish chapters, I couldn't put it down.  The truth is that I enjoyed it so very much that I bought a copy of Jarrett's Pattern in Red and Black (1934; Coachwhip, 2017)  written under her alias Faraday Keene.  This character-driven story may not be for everyone, but there's just something about the deep delve into people's dark psyches  that appealed to me.
Recommended, mainly to readers of older mysteries, as well as to people who, like myself, are always on the lookout for something different and who love finding the writings of authors whose works have pretty much faded away into obscurity.
Posted by NancyO at 1:40 PM