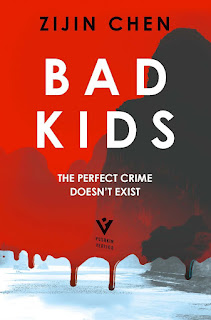 9781782277620
Pushkin Vertigo, 2022
translated by Michelle Deeter
332 pp
paperback (read earlier this month)
Continuing to try to catch up on my posts here,  Bad Kids by Zijin Chen is yet another book in the Pushkin Vertigo collection, available in English for the first time.   There is another book by this author that has been translated from Chinese to English by Michelle Deeter, The Untouched Crime, published by Amazon Crossing.  Needless to say, when I found out about that one, I hit the buy button immediately.
A brief word about Bad Kids:  the back-cover blurb labels this novel as "Dark, heart-stopping and violent," and I'll agree to dark and certainly to violent, but "heart-stopping" is a bit over the top.  However,  it is certainly one of the most twisty novels I've enjoyed in a while, meaning that just when you think the endgame has played out, there's more.  And then some.
It's July, 2013, and Zhang Dongsheng has taken his wife's parents for an outing at Sanmingshan, "the most famous mountain in Ningbo," and now a nature park. The in-laws are happy to be there -- it's a popular and crowded place on holidays but on the day of their visit the park is "practically empty."   The "filial son-in-law" suggests that they make their way to an observation point,  where they'll take a break.  Once there, he looks around and sees no one nearby except three kids "clowning around near a pavilion," but "dismissed them as unimportant," then offers to take the in-laws-  picture with the great view behind them as backdrop, convincing them that they should sit on the wall for a better photo.  Once they've done that, he puts his hands on their shoulders as if to position them just so, and then, with a smile on his face, picks up their legs and it's 再见 (zaijian, bye-bye) to the in-laws as they go tumbling down the mountain.  Zhang knows that there is no way they could have survived that fall, yet a few people had heard the in-laws scream so he has to make it look legit and calls for help.   Outwardly he looks panicked; inwardly he's smiling at the thought that he'd committed the perfect crime; even the police label it accidental death.   What he doesn't know (and this is not spoiler territory -- it's on the back cover) is that while he thinks he got away with it,  those "unimportant" kids have inadvertently caught it all on video.
Two of the three kids,  a boy by the name of Ding Hao and his friend, a girl called Pupu, had run away from an abusive situation in an orphanage  in Beijing,  and not wanting to return to their respective homes, had made their way to Ningbo and to the home of the third, Zhu Chaoyang, Ding Hao's friend in primary school.  To make a very long and complicated story a bit shorter,  Chaoyang's father gives him an old camera, and the kids decide to go to the nature park at Sanmingshan, where Chaoyang's mother works; it just so happens that they were there at the same time that Zhang Dongsheng was knocking off his in-laws.  The kids spend time taking photos, making videos and goofing around with the camera, and after arriving back at Chaoyang's place (and just before heading to KFC), Pupu discovers that they've picked up something completely unexpected on video -- the death of Zhang Dongsheng's in-laws as it really happened.   Chaoyang is ready to report the murder to the police, but is stopped by Pupu, who reminds him that the police just might ask who the other kids were on the video, and would likely send them back to the orphanage, which is an unacceptable choice.  As the back cover blurb notes, "an opportunity for blackmail presents itself," with Pupu deciding that she and Ding Hao could use the cash for their futures.   And so it begins ... with consequences unforeseen for all involved.
If this were all there was to the plot, it would still be good.  But Zijin Chen isn't quite finished with his readers yet.  There's much more going on outside of the blackmail as one of the characters takes it upon himself to commit a horrific act that will also generate some serious fallout for everyone involved, and then, well let's just say that there will be more deaths than those of Zhang Donsheng's in-laws.   There is, of course, a police inspector looking into these, but for me the story was less about the investigation than the choices that were made in each instance and the resulting consequences.
Bad Kids was a fun novel to read, and little by little as all of the unexpected twists and turns came into play, and characters played various battles of wit with each other,  it was seriously difficult to put the book down.  I have to admit to a few eyerolls here and there and thoughts of "as if" at different points, but the novel makes for hours of entertainment even as the author shines a light on the complicated nature of family relationships and more than a few social issues that show up within the story.  And by the way, the ending was perfect.  After reading this one,   I would really love to see more Chinese crime novels in translation (hint hint, Pushkin Vertigo).
Recommended to people who enjoy twisty crime novels and who don't mind going deep into the dark in their reading.
Posted by NancyO at 4:26 PM