Death in Breslau, by Marek Krajewski

First in a series of four novels,  Death in Breslau might just possibly be my favorite crime fiction novel so far this year. I hadn't even finished this book and bought the next two,  The End of the World in Breslau and The Phantoms of Breslau. If the cover doesn't grab you, the story will.

The story begins in 1950 in a Dresden psychiatric hospital, where the director is being pressed by a Stasi  official who wants to question the patient named Herbert Anwaldt. Herbert Anwaldt's identity and the reason he is a patient are questions the author answers as the book moves back and forward in time, beginning in 1933 in Breslau (now Wrocław).  The main character of this novel (and the four that follow) is Counsellor Eberhard Mock, who in 1933 was the Deputy Head of the Criminal Department of the Police Praesidium. That year, Hermann Göring had taken over the posts of Minister of Internal Affairs and Chief of the Prussian police.  The Nazis had become very active in the Police Praesidium, and an entire wing of the building had been taken over by the Gestapo.

Mock is summoned to a side track of the main railway station, where he finds the bodies of Marietta von der Malten and her governess in a saloon car, savagely raped and murdered.  Clues left behind include some dead scorpions, some live ones, and some cryptic writing in blood on the wall of the train car.  Mock knows the dead girl and  her father, the Baron, a fellow Mason and someone to whom he owes a great deal. His investigation leads him to Friedländer, a Jewish importer specializing in strange "vermin," which makes the Nazi anti-Jewish propagandists very happy.  It also solves some of Mock's political problems, and the arrest leads to Mock's promotion as Criminal Director.  But it's not the end of the story -- after Friedländer "commits suicide", the Baron receives a package containing some clothing that had belonged to his daughter and realizes that the real killer is still out there somewhere.  Herbert Anwaldt, an alcoholic policeman from Berlin, is summoned to work with Mock to secretly discover the identity of the real murderer.

This book is as dark as dark gets. Spies are everywhere, Mock has enemies that would like to bring him down, the Gestapo is a force to be reckoned with. The sinister atmosphere does not let up for a moment. The characters are well developed, especially Mock, who although married, spends his Friday evenings at a brothel playing chess with two lovely women (one under the table, one at the table) who know that "every successful move was assigned a specific erotic configuration." He is quite adept at playing the game with the Nazis, and becomes a master of the art of self protection, both physically and politically. There are many other characters who indulge in hedonistic delights, and there are the Nazis, and nearly everyone seems to have secrets that they'll do anything to keep hidden. And if ever a book captured a place and a time, it's this one.


Death in Breslau is stunning, a novel you won't forget any time soon after reading.  While it's great fun, it's also claustrophobic sometimes as you sink deeper and deeper into the world of the dark and sybaritic side of Breslau and its inhabitants. It's also an excellent look at the politics and changing Europe of the 1930s.  I absolutely loved this book and very highly recommend it to readers who want something truly edgy and way off the beaten path in their crime fiction. 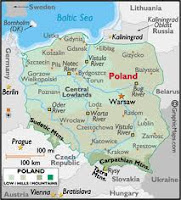