The Fire Engine that Disappeared, by Maj Sjöwall and Per Wahlöö 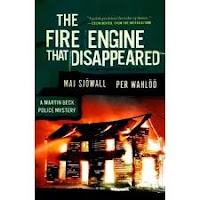 Arriving at the 5th installment out of the 10-book series to feature Martin Beck, the action begins on a freezing night police as Detective Gunvald Larsson goes to check on Officer Zachrisson, who is  maintaining a surveillance on an apartment house. Offering a bit of a respite to the near-frozen officer, Larsson takes over for a bit, and while he's struggling to stay warm, things unexpectedly heat up when the house explodes.  While in a bit of a state of shock, Larsson eventually rescues several people from the house, but sustains a head injury and is put into the hospital. As it turns out, the man the police were watching wasn't among the survivors. But how did the fire start? What caused the explosion? Was this a suicide attempt, terrorism or just an accident? And where was the fire engine that had been sent for?  In the meantime, a man who committed suicide is discovered in his apartment, leaving no note, just a piece of paper with the name "Martin Beck" written on it.  This time Martin Beck isn't exactly in the forefront, but the mystery is challenging, and watching the solution unravel is intriguing.

The Fire Engine that Disappeared is yet another sterling work in this series. The character development continues to grow stronger with each installment, so that by this book (if you're reading them in order)  you get the feeling that you're checking in once again on what your old friends are up to. What I find so amazing about this series is that each of these books is rather short, but there's a full story, great characterization, and an interesting look at the authors' world view in each one without any superfluous detail that often bogs down a police procedural and makes you want to skim to get back to the meat of the investigation. I'm sitting here looking at my copy of Nesbo's The Leopard, coming in at 611 pages; I mean, what a contrast! But back to the Beck series: there's also enough witty humor so that the reader will often walk away with a chuckle in the midst of a lot of serious business. This book is no exception, especially when Wahloo and Sjowall bring in Inspector Mansson, who is a complete contrast to Beck.

You could read this book as a standalone, but it will definitely serve you better to read the entire series because of the social/political components that the authors are trying to highlight and because the characters become more familiar with each book.  Highly recommended, not to just to readers of Scandinavian crime fiction, but to crime fiction readers in general.  And for Pete's sake, don't expect Stieg Larsson here, and don't complain when you don't get him.  With this series, the authors have created some of the best crime fiction I've ever read.
Posted by NancyO at 11:25 AM