Have Mercy on Us All, by Fred Vargas

Have Mercy On Us All is book number three in the delightful series by Fred Vargas. Although this one has an interesting (although somewhat farfetched)  mystery at its core, it really stands out because of the crazy cast of eccentric characters that populate its pages.

One such character is Joss Le Guern, whose current vocation is town crier in the square at the intersection of Boulevard Edgar-Quinet and Rue Delambre in Paris. For a mere 5 francs, anyone can drop a message about anything they want to say in his box and have it read that day. When read, each message begins with a number, for example:

Five!...For sale, litter of white and ginger kittens, three male, two female. Six: Could the drum players making jungle noises all night long opposite number 36 please desist. Some people have to get some sleep. Seven: All types of carpentry, especially furniture restoration, perfect finish, will collect and deliver...

But lately, Joss has been reading out some rather odd messages, which another resident of the square named Hervé Decambrais has been following with interest.  Decambrais realizes that all of these very odd messages have been copied from different texts dealing with the outbreak of the bubonic plague of the 17th century.  Concerned about what he views as the ominous tone of these messages, Decambrais and LeGuern contact the police -- and Adamsberg becomes involved in the case. But at the same time, Adamsberg has been investigating the strange occurrence of a number of apartment doors throughout Paris being painted with an odd symbol: 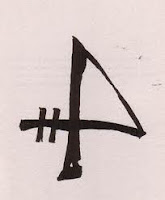 and the two lines of investigation converge when a corpse is discovered, looking like a victim of the plague.  Many more corpses soon follow -- and Adamsberg has to figure out what's happening before panic erupts in the streets of Paris.

The mystery itself is intriguing and moves along at a good pace, but the plot is definitely secondary to the people in this novel.  Vargas' forté definitely lies in the creation of her quirky characters, as well as her ability to give the reader a sensory experience of the city, especially at the Place Edgar-Quinet where LeGuern broadcasts the news.  She's captured a slice of life in this square which sometimes the reader forgets exists in the 21st century -- it could have been (with a few exceptions), a portrait of life in an earlier time.  And if you've read her novel The Three Evangelists, you'll recognize some old friends that make an appearance in this novel; the ongoing story of Adamsberg and the lovely Camille also continues.

I definitely recommend this novel and this series -- it's light and fun, and at the same time Vargas' work as a medieval historian is most definitely transferred to these pages, adding another dimension to the overall reading experience.  While I suppose you could read this book as a standalone, it's better to start with her first work, The Chalk Circle Man and follow the novels in publication order.