First in a series of mystery novels to feature Kati Hirschel, Hotel Bosphorus is set in the city of Istanbul and features an unlikely main character -- a 40ish owner of a crime fiction bookstore.  Kati was born in Istanbul, but her parents took her to Germany when she was only a small child.  Around the age of 30, Kati returned to Istanbul, where she's lived ever since. Istanbul, a city of some ten million people, "the size of a nation," is a city Kati loves and knows well.

Some time after Kati receives a phone call from Petra Vogel, an old friend from university days, Petra arrives in Istanbul. She is there to star in a film, and makes her temporary home at the Hotel Bosphorus.  After catching up with Petra about their lives, requiring a night of heavy drinking on Kati's part, a couple of days later Kati is stunned when she calls Petra at her hotel and a policeman answers.  It seems that there's been a murder at the hotel, and Petra is the main suspect.  The victim is the director of the film, Kurt Müller, and the rumor was that Petra and Kurt were an item. Petra, of course, denies any involvement other than professional.  But Kati's just not sure, and decides that she needs to get to the truth of what really happened.  Her credentials? Well, as silly as it sounds, she owns a crime fiction bookstore, and as she tells Batuhan, the police Inspector, who also reads crime fiction, "Deep down, we all want to be a detective really."  Her "detective" work, a la Miss Marple, leads her in several directions and to meetings with a wide variety of people: to those involved in the making of Petra's movie, to a powerful Istanbul family -- one of whom is a feared, kind of mafioso-type gang leader, to the police, and ultimately to a chance encounter with someone who will help her crack the case.

It's a classic mystery scenario, with the added bonus of being set in the city of Istanbul.  The sense of place is definitely well evoked, as the reader gets a tour through different areas of the city, with its various local haunts and the different types of people that live there.  There are also a few tidbits of interesting commentary dealing with the effects of economic crisis on the locals and on the country scattered throughout the story.  Kati spends a great deal of time making observations about the cultural differences between Germans and Turks, noting that "only those who have lived abroad have what it takes to criticize their own people, especially in the case of Germans."  At first, these observations are interesting since Kati herself is kind of a muddled individual, with "a bona fide Turkish passport," who while in Turkey," is a German who "speaks good Turkish."  When in Germany, although she has a German passport, and her mother is a Roman Catholic, she's a Jew.  But soon enough, as these observations start taking over the story, they a) get to the point of becoming  denigrating and further the negative cause of cultural stereotyping; b) start to grate on the reader's nerves; and c) leave the murder mystery elements very muddled.

In fact, this book suffers from poor organization, clunky writing, and a murder mystery that by the time you get to the end seems to have taken a back seat to the rest of what's going on in Kati's personal life.  It's really difficult to get through in terms of the crime -- you have to literally sift through what's irrelevant to get back on track to the murder's solution.  This is sad, really, because Istanbul is such an exotic locale that I was looking forward to something new here. I was also looking forward to seeing how the author could blend Kati's ownership of a crime fiction bookstore and her detective work. But that was not to be in Hotel Bosphorus.  Nor were the characters very realistic -- the police inspector, as an example, who tried to get Kati in bed a couple of times or the over-the-top portrayal of the local mobster.

This being the case, I'd still give the next one a go, if only to find out if Kati has been able to mellow out a bit on the negatives and get into some real crime solving in Istanbul.  I think this very gutsy character has some potential and I would love to see the author give more space to local crime, this time using Kati's rather unique personality traits to help her in her detective work rather than constantly ragging about the Germans in Turkey. 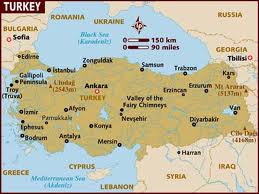