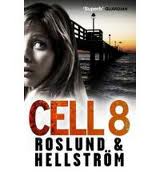 Sliding in between the Roslund-Hellstrom writing duo's Box 21 and their award-winning Three Seconds at number three in the Ewert Grens series,  Cell 8 is by far much different than anything else these authors have yet produced.   For one thing, a great deal of the action takes place in the U.S.; for another, the subject matter is extremely controversial, and will keep crime-fiction readers  debating the main issue for a long while, especially here in America.

John Schwarz is a family man, living with his wife and young son in Stockholm.  He is employed as a band singer on the Åbo ferry between Stockholm and Finland, and one night while he's at work, in the middle of a song, he sees a drunk passenger give some unwanted attention to a young woman on the dance floor.  Thinking about the two women in his life (one from an earlier time, one his wife), he sees red, loses his temper, and before he knows it, he's beating up the passenger, ending with kicks to his head, landing the guy in the hospital.  Security is called; the  Stockholm cops are there to meet him as the ferry docks in Stockholm.  He manages to avoid them and to get back to his apartment and his wife, and he knows it's only a matter of time before the police catch up to him.  When they finally have him at the station, he refuses to talk, but ultimately, routine identification procedures identify him as John Meyer Frey, an American citizen using a Canadian passport.  But there's a slight problem: John Meyer Frey died some years ago, while awaiting his execution on Death Row at a prison in Ohio.   Ewert Grens is very interested in the case, interested in seeking justice at first because he knows all too well what may lay ahead for someone suffering injuries to the brain, but later because of the sad and frustrating circumstances surrounding  the events that he had unwittingly set into motion.   There's another person interested in the Schwarz case as well -- a man who has lived an empty and tormented life  after missing the retribution he had waited on for years.

While the history  of John Schwarz is an interesting story on its own,  Roslund and Hellstrom also use this novel as a platform to explore several topics related to  state-sponsored executions: the behind-the-scenes politicking involved in fanning  the flames of popular support for the death penalty; the problems inherent with the death penalty, especially the possibility of innocence in a capital case;  the obligations of nations regarding extradition policies and the politics of the national players at the highest levels, and putting all of these components together, the human toll on both sides of the issue.  The criminals in this case, really, are the politicians; the authors spare absolutely no effort getting their points and politics across.

Cell 8 is very intelligently written.  The story flashes back to the past, alternating with the present both in Sweden and the United States.   The book has obviously been very-well researched, and some of what these authors have discovered as far as their medical knowledge was amazing.   And this is a timely story as well, with the latest US execution of someone who had been convicted of killing a cop based only on the most circumstantial of evidence at trial, and whose appeals had all been exhausted prior to his death.   My problem here is with the character of Vernon Eriksen -- I did not find him to be all that credible, and when all is said and done, even with good intentions, he's probably one of the sickest examples of humanity I've ever encountered.

This book is guaranteed  to cause a stir when it's released here in the U.S. -- in a country so divided in its opinions about the death penalty, I'm not sure how this novel is going to be received.  Be that as it may, even though this is not the authors' usual crime-fiction fare, I liked it -- beyond the story set around John Schwarz, what really impressed me was the behind-the-scenes look at  politics involved in capital cases here in the U.S., as well as the rather dodgy actions of international governments where extradition politics are concerned. While this book may be a case of  preaching to the choir, so to speak, it's still a very worthwhile read.  Don't give up on it... when it begins it's a bit confusing for a while, but hang in there.
Posted by NancyO at 1:30 PM