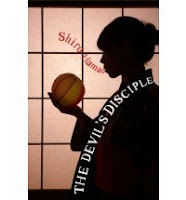 The Devil's Disciple is composed of two short stories: "The Devil's Disciple," and "Did He Kill Them?"  Each story is firmly planted in the noir genre, although the stories also reflect the growing movement in art and literature of the time known as "ero-guro-nansensu," or "erotic grotesque nonsense." This movement and more about the form of the two short stories is discussed in the very well-written introduction to the book written by the translator. In The Devil's Disciple, both short stories examine the nature of guilt as well as the fallibility of the law; but on a deeper level, the stories reflect the writer's fascination with the complexity of the human psyche.

The first story is entitled "The Devil's Disciple," and is the story of a man called Eizo, charged with and facing trial for murder.  The story is a letter to a prosecutor, former mentor and lover of Eizo, Tsuchida Hachiro.  The two met in their school days, and Eizo quickly fell under Tsuchida's spell.   In fact, Eizo blames his current plight on Tsuchida, saying that "If I hadn't met you when I was a boy I would never have ended up in this place.  You didn't teach me crime. But you did give me the personality of a criminal."  Eizo sets forth the actual events of the case, telling Tsuchida that although someone did die, it wasn't really a case of murder. What follows is a tragic story, all of which Eizo says was due to Tsuchida's tutelage leading Eizo to "build up a demonic philosophy."

Story number two is "Did He Kill Them," a rather twisted tale of the bloody death of a married couple in their own home.  At the scene there is only one possible suspect, Otera Ichiro, who is arrested for the crime and refuses to speak, or even file an appeal after he is tried, convicted and sentenced to death.  After Otera's death, the barrister discovers a manuscript he wrote while in jail, outlining the truth of what happened that night and why he kept his silence.   Part of the story is narrated by a barrister who is addressing a group of detective novelists, reflecting a rather postmodern approach taken by Hamao in writing this piece; the other part is told through what Otera wrote in his manuscript.

While both stories are intriguing and capture the reader's attention immediately,  "Did He Kill Them" has a much darker tone and is much more atmospheric and psychologically complex than the first. "The Devil's Disciple" has a rather twisted ending that will lead the reader to reflect mainly on the question of guilt.  I can't really go into either story in any depth without spoiling it, but considering how short these stories are, they are very intense and provide a great deal of food for thought; they also remind me a great deal of some of the stories by Tanizaki, another Japanese author whose works I enjoy immensely.    The Devil's Disciple is one of those rare books that works well both in the field of crime fiction and outside of it; it is probably one of the most literary pieces of crime fiction I've read lately.

I'd recommend this book first and foremost to people familiar with Japanese crime fiction and who enjoy  that genre's dark atmosphere, psychological complexity and in many cases,  the bizarre twists these authors love to employ.    While much of Japanese literature has these traits (Kobo Abe just popped into my head, for example) many of the crime writers from Japan really know how to get into the darkness of the soul and transform it into a work of art. Other than that audience, crime fiction readers who are more into the psychological aspects of crime would like this; if you're looking for something cozy, cute or warm and fuzzy, this is not the book for you.  A lot of Japanese crime might be seen as "weird," and this one is,  but deliciously so. 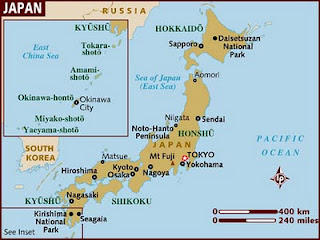