The Crime of Julian Wells, by Thomas H. Cook 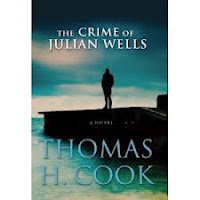 "He was like Mephistopheles...He took hell with him wherever he went."
A week or so ago I was flipping through the books that Amazon has so kindly recommended for me, and as if there was a checklist in my head beside each title, the invisible pencil in my brain was ticking the no boxes on down the line until I saw this book by Thomas H. Cook.  Some time back I had bought his The Chatham School Affair, which I loved, one I really must dig out and reread sometime soon.    Anyway, evidently some algorithm linked me to Mr. Cook's newest novel,  The Crime of Julian Wells, based on my earlier purchase, and since I was looking for something different to read, I thought I'd take a chance on it.  It paid off -- in spades.  Although there are some very solid mysteries at its core, technically it's not a "crime" fiction, so to speak, but I'm discussing it here because Mr. Cook is a well-known author of crime fiction, largely psychological in nature.  He has twenty-five other novels to his credit, his first published in 1988. He's also written three nonfiction, true-crime books, and has shared editorship with Otto Penzler in two series: Best American Crime Writing and Best American Crime Reporting.  Now he's delivered a story that gradually unfolds within a world of darkness while examining the people who dwell there -- a world in which

“The road to moral horror is never direct. There are always ramps and stairs, corridors, and tunnels, the secret chamber forever concealed from those who would be appalled by what they found there.”

****
Philip Anders, "stay-at-home" literary critic and the narrator of this story,  was the best friend of  Julian Wells since childhood until the day Julian rowed himself out into the middle of a pond bordering his Montauk family home, opened his veins and bled to death in the boat.  His death was a surprise to both Philip and Julian's sister Loretta.   His decades-long writing career  led to  articles "about plague and famine and holocaust," and five books  which focused on some of history's  most horrific crimes and the monsters who committed them.  As Philip, Loretta and later Philip's father, a former bureaucrat at the State Department,  begin to ponder the whys, Philip wonders if Julian's long immersion into human darkness might have taken its toll on his friend; Loretta believed he was "like a man in a locked room, trying to get out," and Philip's father thinks that "Julian had a lot of feeling...too much of it morbid," and that darkness was all Julian knew.   As Loretta and Philip talk, Loretta informs him that she believed Julian was already on track for another book -- she had seen him looking at a map the day he'd died, the first step in Julian's writing process, after which he'd read all he could then travel to the site. The map, she says to Philip, was of Argentina, and  a part of it had been circled.  Julian and Philip had visited the area together some thirty years earlier, where they had met a lovely young woman who served as their guide.    When Loretta wonders if their trip may have been on Julian's mind, Philip discards the idea because it was so long ago that they'd been there.  But soon he begins to wonder -- was it possible that  Julian's state of mind that day had something to do with that old trip? And what about the dedication in Julian's book where he acknowledged Philip as the "sole witness to my crime." What crime? What was the crime of Julian Wells?  Philip decides he must act as Julian's friend and try to uncover the mystery behind Julian's death.

Very cleverly constructed, the novel takes the reader not only through Europe and Argentina as Philip follows Julian's footsteps, but also into a journey where the author explores such thematic issues as the nature of guilt, deception and betrayal, the various forms of cruelty and the hearts and minds of the people who employ them, as well as  the meaning of  friendship. Each chapter brings Philip closer to the truth, not only about the answers he seeks but about his friend Julian as well.  Philip's travels also reveal the darkness and malevolence that take root and sometimes come to maturity in the souls of human beings.  At the same time, his search will reveal that  life has a "cruel randomness"; that it is a  "lottery upon whose uncontrollable outcome everything depended."

The author throws in several references to classic crime writers like Eric Ambler and Graham Greene, and conjures up old spy and noir novels in a smoky cafe in Paris with

"a dim, oddly undulating light that throws this mysterious figure into half shadow, that one into silhouette, by turns revealing or concealing a forehead, a jaw, an eye with a patch, each face broken into puzzle pieces...you would put two men in linen suits, one with a very thin moustache, the other clean shaven, wearing a panama hat...where a man in a red fez drinks tea from a white china cup..."


Philip at one point describes Julian as being "like Orpheus," bringing his "music into hell, and like him, he had died in a world that no longer wished to hear it."   Julian's  approach to his writing was to view each of these horrible criminal acts  "part of a larger disorder, one fiber sprung from a hideous cloth."  He's even witnessed some of these horrific "fibers" firsthand:  a king who bought several luxury cars while the people in his country starved, with very little water, maybe living to age 31.  He's seen battery cables hooked up to cars outside  leading inside into a basement where torture is underway, fully justified in one man's mind as being good for the country's future.  But for others, guilt eats away at the soul, not easily if at all assuaged. Ironically, copywriter Loretta finds that the big trend in the publishing biz is "happy talk. Tips on how to avoid thinking about the only things Julian ever thought about"   In this world where Gatsby is condensed down to 17 pages, Julian's work and the truth behind it is destined to be forgotten, as will all of the victims caught up in this "cruel randomness."


The people in this book are terrifically and at times frighteningly well drawn, some of them have enough personality to send the occasional shiver down your spine.  The Crime of Julian Wells is an incredible novel, one I absolutely recommend.  People who are interested in Argentina's Dirty War would be great readers for this novel; historical crime buffs and anyone interested in the darker events in European history would also like it.  It's not a cozy-type thing at all; some scenes are graphic although not terribly overdone -- considering the subject matter, it could have been much, much worse.  The novel also ventures into the philosophical at times, something that  might turn some readers off, but for others it might be that something different you've been looking for.  Super, super book -- some of the best and most original writing I've seen in contemporary American crime fiction.