The Lady in the Lake, by Raymond Chandler 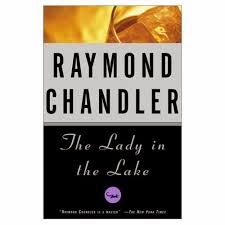 Cutting right to the chase, the fourth novel in Chandler's Marlowe series begins with a missing wife.  Degrace Kingsley, a businessman in the perfume business, hires Marlowe to find his wife Crystal. Although they'd been "washed up for years," Kingsley needs Marlowe to find her to make sure she hasn't "got mixed up with the police" -- he'd lose his job due to the scandal. He'd received a  telegram saying that she was on her way to Mexico to get a divorce and marry another man named Chris Lavery, but then two weeks later, he got a call about his wife's unclaimed car being left at a hotel in San Bernardino.  The last time he knew Crystal's actual whereabouts was a month earlier, when she was staying at their cabin up at at Little Fawn Lake at Puma Point.  Marlowe starts his investigation by calling on Lavery, then  leaves the city for the lake. There, he introduces himself to Kingsley's alcoholic caretaker, Bill Chess, who is about as unhappy as they come -- it seems that his wife Muriel has also disappeared, in fact, on the very day that Mrs. Kingsley was supposed to have come to LA for a party.   Marlowe, who thinks Bill is a "fundamentally good egg," even though he can become violent very quickly, asks Chess to walk with him to the lake. While watching a fat fish named "Granpa" swish around in the water,  Chess sees something else there, which turns out to be Muriel's dead body.   Not a believer in coincidence, Marlowe decides that he needs to look into both cases, and finds a lot more than anyone would have expected.

Things in Los Angeles have changed a bit since the time of The High Window. Chandler makes a number of references to the war starting with the very first sentence of the novel,  as a sidewalk in front of Kingsley's office building, made of "black and white rubber blocks" is being dismantled to go the government. Later, he notes that  armed sentries are standing guard at the dam at Puma (read Big Bear)  Lake, "at each end and one in the middle."  Marlowe runs into a woman who walked to her destination to save her tires for the government. Men are waiting to hear about their enlistment. At the same time, some things have remained the same: crooked cops, murder, blackmail,  illegal gambling and drugs are still in action in the city.   There's another big difference in this book that sets it apart as well -- a good deal of action takes place away from LA, up in the mountains where life is much slower, where deer walk unimpeded, and where people are actually nice and rudeness is conspicuous and not appreciated. 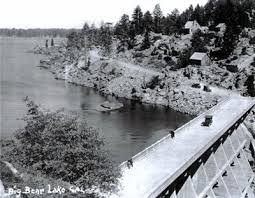 The Lady in the Lake is quite intriguing, and although isn't my favorite of the Marlowe novels so far, Chandler is still very much on top of his game here. The same wisecracks and witty turns of phrase are still in play. Marlowe continues to try to hold on to his own moral compass while having to resort to less than ethical means to find the bad guys.  And while there is a  basic formula shared by all of these novels -- Marlowe being hired, Marlowe bumping into peripheral cases that somehow tie to his own investigations and get him into some sort of trouble -- each book is different in its own way. Normally when crime novels get formulaic I get bored.  For some reason, that's just not the case with these books -- between Chandler's writing, his focus not just on Marlowe but the other characters as well, and the way he describes Marlowe's Los Angeles, I can't get enough.