The Little Sister, by Raymond Chandler 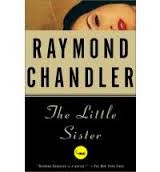 paperback
#5 in the Philip Marlowe series

I can't get enough of Raymond Chandler -- or more precisely, I can't get enough of Philip Marlowe. Eventually I'll make my way back to modern crime, but I have three more Marlowe novels (and one by David Goodis) to finish first. I'll be revisiting Marlowe á la Benjamin Black here shortly as well, when I get to his The Black-Eyed Blonde.  In this original series though, Marlowe as a person fascinates me, as does Chandler's look at Los Angeles of the time.  With The Little Sister, the plot is once again overly convoluted and overly complex, but Chandler is in rare form here, having Marlowe spill his guts about the city, his job, the people and even the state of California.

Marlowe is back in #615 Cahuenga "stalking the bluebottle fly" that's been buzzing around him for a while, when in walks Orfamay Quest, of whom Marlowe notes "nobody ever looked less like Lady Macbeth." * She's not Marlowe's usual fare -- no make up, and rimless glasses that "gave her that librarian's look." Hailing from the small town of Manhattan, Kansas, Orfamay wants Marlowe to find her brother Orrin. He came to Bay City a year earlier, and the last Orfamay and her mother heard from him was several months earlier.  Now they're worried about him.  Marlowe starts his search for Orrin at his last known address, and once again, our hero finds himself heading down the usual tangential road into a case that puts him smack into the glitz, glitter, and moral ugliness of Hollywood, a killer with a penchant for icepicks, corrupt cops, good cops who bemoan the kind of crooks the city draws, drugs and blackmail. It also leaves Marlowe feeling very, very low. 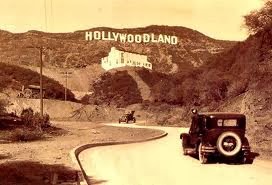 Once again, Chandler's descriptions of Los Angeles are at peak form, both positive and negative. Chapter Thirteen of this book finds Marlowe reflecting on the case, Hollywood, the city and himself, with Marlowe at his most melancholy state of all of the novels so far. For example,


"All I know is that something isn't what it seems and the old tired but always reliable hunch tells me that if the hand is played the way it is dealt the wrong person is going to lose the pot. Is that my business? Well, what is my business? Do I know? Did I ever know? Let's not go into that. You're not human tonight, Marlowe. Maybe I never was or ever will be. Maybe I'm an ectoplasm with a private license. Maybe we all get like this in the cold half-lit world where always the wrong things happens and never the right."


"Wonderful what Hollywood will do to a nobody. It will make a radiant glamour queen out of a drab little wench who ought to be ironing a truck driver's shirts, a he-man hero with shining eyes and brilliant smile reeking of sexual charm out of some overgrown kid who was meant to go to work with a lunchbox. Out of a Texas car hop with the literacy of a character in a comic strip it will make an international courtesan, married six times to six millionaires and so blasé and  decadent at the end of it that her idea of a thrill is to seduce a furniture mover in a sweaty undershirt."

By 1949, the publication date for The Little Sister,  in real life Chandler wasn't all that keen on Hollywood.  There's a wonderful piece written by him from The Atlantic in 1945, where he lets his readers know exactly what he thinks of working in the movie business.

While the plot is once again complex enough to keep a file on who's who, how they're connected, etc. etc., I just love the sardonic cynicism of Marlowe. I also found myself for the first time in the series feeling sorry for the guy.   I cannot speak highly enough of these novels -- they are some of the most literary crime novels ever written.


*After finishing the novel, it's very clear why he chose this particular description.
Posted by NancyO at 10:10 AM