The Sleepless Men was written by E.H. Nisot, a pseudonym of Mavis Elizabeth Hocking Nisot.  She was born in 1893 in Thornton Heath, Surrey and died in 1973.  She was the daughter of Joseph Hocking, a novelist from Cornwall; her uncle was Silas Hocking, who was also a writer as well as a Methodist minister.   Nisot also used the pen name William Penmare, a name that caught my eye since the main character in this novel shares the same last name.  As William Penmare, she wrote The Black Swan (1928), The Scorpion (1929), and The Man Who Could Stop War (1929).  Her list of titles as Elizabeth Nisot reads as follows:

The Sleepless Men was included as a part of Doubleday's Crime Club which published 2,492 titles between 1928 and 1991.   You can tell an original crime club selection by its logo

and to give you a further clue as to what you're going to be reading, the inside dust jacket shows a symbol you're supposed to match to the little symbols on the back cover. 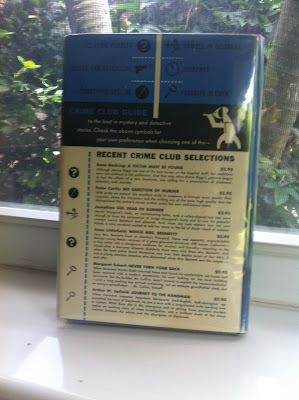 The symbol to match for The Sleepless Men is a gun being fired, which clues the reader that this book will be a "chase and adventure" story, and that is precisely the case in this book set in New York City.

The main character is an innocent writer named Mark Penmare,  who finds himself as the main witness in a case of multiple murders.  In a restaurant one evening having dinner, he witnesses and overhears one woman, Laurel Craig,  involved in two very different conversations, including one where money changes hands.  Moving to the bar, he is later joined by Laurel  and her friend, an amateur actress and singer called Charlie, who engage him in conversation. He walks Laurel back to her hotel late in the evening, and when he returns to ask her a question the next day, he discovers that she's dead.  He walks straight into the crime scene, where the police are eager to hear from him.  Rather than being considered a suspect, the police realize that Penmare is a valuable witness, and Penmare becomes sort of an adjunct investigator helping the cops to solve Laurel's murder. But as soon as that investigation moves into full swing, another body turns up, Penmare's flat is ransacked,  and because of the nature of what Penmare had witnessed, he realizes that there could very well be a third death if the police do not act quickly. When all is said and done, while this book is definitely a murder mystery that will keep you guessing, it ultimately moves into an area well beyond the usual murder-mystery fare.

The Sleepless Men starts a wee bit slowly but the action increases as you move further into the story.  There's a murky figure that weaves in and out called only "the man in the gray suit," so just who this guy might be adds an extra layer of mystery.   It is a fun little book, actually, and while it comes across as dated, the core mystery itself is easy to follow, interesting and leads into something only hinted at, but actually quite  unexpected.  Curiosity nearly killed me getting to the ending, since the author leaves it all until then to unravel the story, but I had a great time along the way.

I LOVE these old books!