"Life would come to a premature end, like a stream diverted, dammed and left to become stagnant, mosquito-ridden acqua morta."

Keeping things on the level, the author emailed me a while back and asked if I would read his book. I've been sort of out of that mode for awhile, preferring to catch up on what I already own (and frankly I'm just tired of getting some pretty poorly-written books)  but this one looked interesting.  He offered me a kindle/iPad copy but I bought the book rather than taking the e-reader version since I'm way more of a love-the-feel-of-a-book-in-my-hands kind of person.

"Forced into retirement because of ill-health (sic), Commissario Domenico Martelli is hired to investigate a grotesque and disturbing murder.  The case brings him into conflict with his former colleagues and into confrontation with a devious and mysterious killer.  Set in the breathtaking Ligurian countryside, ACQUA MORTA will keep you guessing until the very last page."

The novel opens on Martelli's last day of work as head of  the murder squad; while the case is intriguing, he has to hand the reins over to Fabrizio Rubini the next day. Rubini is a "political appointee," an "enthusiastic sniffer of the arses of other ambitious poodles."  Martelli sees Rubini as someone whose only interest is himself, and when Martelli arrives to investigate, his notion that Rubini is not such a good cop is reinforced by the sloppy mess at the crime scene.  The crime itself is horrific: a man with hands bound with wire had been forced into a barrel while sulphuric acid had been slowly but steadily trickled in from another container. Air holes had been punched into the barrel so the man wouldn't suffocate before the acid could do its job; only about "half a human being" was left. 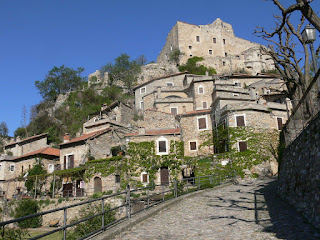 An intriguing case, to be sure, but Martelli won't be working it. Except he will, sort of, from an alternate avenue:  after the victim's brother identifies the body, he goes to Martelli (who is suffering from retirement blues and boredom at this point) on a private basis to find his brother's killer. What Martelli and the rest of the police working the case do not know is that a discovery in a gym six hundred miles away has put British detective Ted Logan on the same trail from a different starting point.

The novel moves between Martelli's work as a private investigator (although he has no license, so it's really all about staying busy) and Ted's investigation so that the reader ends up with a two-pronged story.  The author also takes time to delve into the private lives of these two main characters. Martelli fears that retirement


"... would consist of a prolonged period of torpidity followed by an ignoble fizzling out, probably with a tube up his nose and a cannula in the back of his hand, the sickly smell of disinfectant and the buzzing of a flickering fluorescent light his last sensations on this Earth"

and needs to keep his hand in for sanity's sake; Ted also has job-related personal issues to deal with. But both are definitely challenged by their respective investigations, giving heart and soul over to uncovering the truth.

I have to say that this is a very good first effort, and that I would certainly read the second book the author is planning to write that continues the series. It's definitely a good start and I think the author has good character/plot potential in Martelli and his friends left behind in the murder squad.  But I'm one of those odd readers who thinks less is definitely more -- to me the best crime novels are much more streamlined and really don't need all the extraneous descriptive passages that are everywhere in this book. As just one example, there's what amounts to an entire page describing the landscape and weather around Minnis Bay, ending with Ted's wish that he had a dog (62, 63); there's another entire page describing the scene just getting to a conversation between Martelli and the victim's brother (194, 195). And there are more of these sorts of scenes throughout the book. I get that setting and place is important, but it can also be overdone. If you look at Camilleri's Montalbano series, for example, he expertly mingles setting with story without letting it take over the pages.  One more thing: to be very honest, I figured out the biggest plot twists long before the police did.  Frankly, it was too easy not to, but I chalk this up to first-in-a-series mistakes that many authors make.

However, now that I've got my grumblies and niggles out of the way, I can definitely recommend Acqua Morta to readers who are looking for a new crime series.  The story is dark, really gets into Martelli's struggles to stay mentally afloat going into his retirement, and the two-prong approach was very well done. I think that once Mr. Bane gets the hang of crime writing, we'll start seeing some very nice work from this author.
Posted by NancyO at 10:55 AM