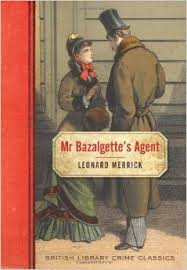 
Not only did I thoroughly enjoy this book, which ended up with an incredibly ironic twist that made me laugh out loud, but I've found myself now wanting to tackle the entire series of British Library Crime Classics.   I have an intense fondness for these old novels.  They may come across as silly and outdated to some readers (which I totally understand)  but they have some of the best story lines that aren't mucked up by all kinds of extraneous stuff --  which is a) what I see in a LOT of today's crime fiction/mystery output, and b) the reason I just don't buy that much contemporary crime any more. Plus, they come with a bonus -- for me, history geek-person-fanatic, they open up a window into the past.  This particular book was written in 1888 and it speaks volumes.

The story is recounted through the diary of our heroine Miss Miriam Lea, who is, as the novel opens, very much down on her luck.  Poor woman -- at age 28, she has no prospects and is facing penury if something doesn't change. She once was an actress, and then became a governess until her past career became known.   Now she's down to her last "four pounds thirteen and sixpence," and her future doesn't seem all that bright.  But everything changes one day when a fellow boarder at her rather sad boardinghouse points her toward a little blurb in the newspaper:

Making her way to Queen's Row, Miss Lea's hopes to be taken on as a lady detective are seemingly dashed until a full two weeks later when she writes in her diary "I am engaged!"  It seems that Mr. Bazalgette is tasked with locating one Jasper Vining, a banker's clerk who is wanted for fraud and for the theft of some bonds of the Egyptian Unified Loan which he'd handled while working in connection with the stock exchange.  Evidently, Scotland Yard has had no success, and the matter's been handed over to Bazalgette.  Her task: along with another female operative who will accompany her in the guise of a maid, Miss Lea is to


"find the man; then to be in his company till you have got sufficient information to convince the authorities you have a right to demand an arrest!"

"The swell" Jasper Vining will probably be hiding out in "capitals or big cities," and Miss Lea and her "maid" Dunstan  are to travel forthwith to Hamburg to begin their search.  She is to stay in the best hotels, dress the part and hopefully make contact. Thus begins a quest that will take Miss Lea and Dunstan on a whirlwind trip through Europe and ultimately across the sea to South Africa in search of this wretched thief and swindler.

I could write so much about this book because there is a LOT hiding under its surface, but I'll  just make a couple of  observations here.  First, in the introduction to this novel, Mike Ashley notes that Mr. Bazalgette's Agent is quite likely the "first ever British novel to feature a professional female detective."  Prior to this one, as he states, there were "quite a few" short stories to do so, but in general, most fictional detectives of the time were men. Well, no surprise there.

Second, and much more interesting, prior to her appointment as Bazalgette's agent, Miss Lea finds herself in a very tight spot.  She's had a brief stint as an actress,  "until they discovered I could not act," at which point she is taken on as a governess by Lady Edward Jones. However, once her former career is made known to her employers, she is let go after two full years of service.  It seems that Lady Edward Jones does not approve and is

"unwilling that Master Pelham Jones should imbibe any vulgar tendencies toward art..."

It seems that even though Miss Lea is obviously highly educated, she is also highly unemployable because of her past association with the stage.  However, when called to work for Bazalgette, she refuses to take the small salary she is offered by her employers -- they want to pay her a pound a day; she most adamantly turns it down.  Women, it seems, are very rarely hired on as detectives; when they are, it's temporary.  As she states,


"...on the termination of this undertaking, I should be without an engagement from you, probably find it extremely difficult to return to more ordinary occupations, and have only earned a trifling sum to make amends for the embarrassment."

To her credit, she holds out for the better sum of thirty shillings a day, but she does recognize that she's pushing her luck here.

It's little things like this (and much more I haven't touched on so as not to put someone to sleep)  that  I appreciate about this novel, and as I said at the outset it has a wonderful, ironic twist at the end that made me laugh out loud.  I won't say what it is or how the book ends, but as I'm squirming in my seat wanting to yell at her for being so daft, things changed in the blink of an eye.  Mr. Bazalgette's Agent is a wonderful book if you are into crime literature of the Victorian era.  Instead of looking at the book as "dated" or "out of touch" with the modern world, it should be appreciated for what it is -- a unique book in its field that allows a  woman in the role of an otherwise mostly-male career. And besides that, it's just plain fun.
Posted by NancyO at 10:55 AM