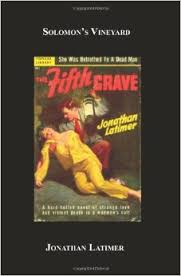 With the call to read banned books about to start up again here shortly (banned books week starts the 27th), crime readers may wish to move off the beaten path and read something really different.  Solomon's Vineyard was originally published in 1941, and banned not too long afterwards.  My my how times have changed.  Today we have so much explicit rough sex in novels that it's sort of old hat and skimworthy, but my guess is that the Boston matriarchs and the bible belters of the day rejected it in print, at least in public.

The very short preface to this novel states the following:


"Listen. This is a wild one. Maybe the wildest yet. It's got everything but an abortion and a tornado. I ain't saying it's true. Neither of us, brother, is asking you to believe it. You can lug it across to the rental library right now and tell the dame you want your goddam nickel back. We don't care All he done was write it down like I told it, and I don't guarantee nothing."

That little tongue-in-cheek blurb is signed by Karl Craven, the narrator and main character of this novel. His attitude toward women sucks -- he is the poster boy (and quite possibly king) of misogynists everywhere. Ex-football player and now PI,  the only thing going for this fictional jerk in my opinion is that he was a fervent reader of Black Mask magazine. His creator was evidently a reader of Dashiell Hammett -- if you read Hammett's The Dain Curse, you'll notice that there's a beyond-huge similarity between the two books.  Both (although Hammett's was first, obviously) take the reader on a wild ride centered around an odd religious cult -- here it is the titular Solomon's Vineyard taking center stage, a "religious colony," where they "raise grapes and hell."  Craven's rolled into the corrupt little burg of Paulton to meet up with his partner, Oke Johnson ("a smart Swede", the only smart one I ever saw"), who is there trying to convince their client's niece to leave Solomon's Vineyard and return home.  A lot of money is riding on their success, so when Johnson turns up dead, Craven has to try to get the girl out of there by himself.  But he also wants to nail the people who killed Johnson. And that is not going to be easy, by any stretch.  He makes enemies of the town tough guy pretty much the minute he hits town by bedding his girlfriend Ginger; his real interest though lies in "The Princess," who is "the head of the women" up at the Vineyard.  Craven noticed her the minute he got into town:


"From the way her buttocks looked under the black silk dress, I knew she'd be good in bed."

and then of course, his eyes move further up:


"She had gold-blonde hair, and curves, and breasts the size of Cuban pineapples."

Then in a scene highly reminiscent of Cain's The Postman Always Rings Twice, when Craven finally gets the blonde, he's surprised when he discovers that not only is she willing, but that she likes it rough, telling him 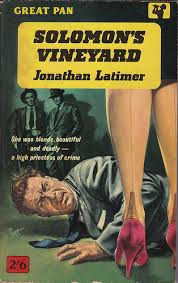 "Hit me!" after she slaps him and then beats him with her fists.

[As a sidebar, I've just finished Cain's novel -- and the first physical scene between Frank and Cora is her telling Frank to bite her.]

It gets pretty out there sometimes, not just in terms of the masochistic sex but also in what's really going on in the town and more importantly, up at the Vineyard.  But to get through it, you absolutely have to leave whatever amount of  PC-ness and modern sensitivities at the door. It's not for the faint of heart -- in this book misogyny and racism rule the day.   If you're a plot-based crime reader, you'll also notice that this book starts moving into the incredulity zone pretty quickly and just sort of hangs there like an inversion layer over the LA basin until the ending.

Solomon's Vineyard is likely the most hardboiled (and icky) novel I've ever read and I'm hoping, judging from the short preface,  is that it's meant to be kind of a wisecracking, skewering take of that genre especially since it's pretty obvious that Latimer sort of "borrowed" elements from at least two other books I've read.  All in all while I hated the main character, I did enjoy the novel.  Once you pick it up, you cannot put it down. It actually scares me that I just said that.