about as obscure as it gets, folks: The Dead Letter and The Figure Eight, by Metta Fuller Victor (aka Seeley Register)

In the realm of American crime writing, this author is about as obscure a find as a reader can uncover. 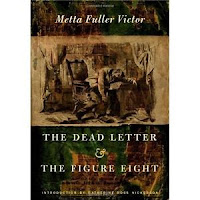 For information about this most prolific author, you can click here to get to my newest labor of love, Forgotten Females Found.


Published in 1866, The Dead Letter, in my opinion, is the better of the two novels featured here. Catherine Ross Nickerson in her The Web of Iniquity: Early Detective Fiction by American Women labels The Dead Letter as "the first American detective novel" (29); both books are, as she notes,


"documents of a moment in cultural history when the young professional seemed to hold the promise of mediating between the cloudy-minded nostalgia of the landed class and the unprincipled greed of the merchant and capitalist classes."  (31)

I will leave it for the reader to discover exactly what she means, but she is most definitely on target here.  While there's a LOT going on under the surface in this volume  (way more than I can explain here), for example a portrait of a) what was holding the American reading interest at the time, b) societal/cultural attitudes towards outsiders (here including the Irish, Mexicans, Spaniards and other ethnic groups) c) the focus on the home, marriage,  and the domestic sphere as a prime focus of "investigation",  these books are also fun reads for anyone interested in American literature of this period that won't likely be found on any general American Lit course syllabus.

A mix of gothic, mystery, romance and sexually-charged domestic novel,  The Dead Letter starts with the story's hero, Redfield, who has been working in the government's dead letter office for just about a year. With just an outline of the basic story here, in going through the mail, he comes across one written to "John Owen, Peekskill, New York," with the date of October 18, 1857, a date that rings a bell in his head. The address also sets off alarms -- he had lived only twenty miles away from Peekskill in the town of Blankville right around that time. When he opens the letter he gets another shock, at which point the narrative begins in earnest, going back two years to the events of 1857 that took place at the home of John Argyll, Esq., Redfield's mentor and benefactor since the death of Redfield's father. Mr. Argyll lived in the house with his nephew James and his two daughters.  As the story opens, Argyll's daughter Eleanor is eagerly awaiting the arrival of her fiancée, Henry Moreland, wondering why he's taking so long in getting to the house. As it turns out, she'll never see Moreland again -- he is found dead on the road,  having been stabbed in the back.  Eleanor goes into deep shock and spirals progressively into melancholia and madness; Redfield, who is secretly in love with her, vows to find and to "bring punishment to the murderer." He hires a deep-cover detective named Burton ("there are not many outsiders who know that person")  to investigate, and between the two they waste no effort in ferreting out the guilty party, although James Argyll has seen to it that the Argyll family should consider Redfield the prime suspect, making him a domestic pariah.   This novel is also highly entertaining -- a "haunted" house complete with ghost, a young girl whose clairvoyant abilities help her father to solve baffling cases, and a lot of female sexual energy going on as well.

Moving along, The Figure Eight is (in my opinion) much more of the domestic-drama fiction variety, although as with The Dead Letter,  murder and detection  is at the heart of this story. Very briefly, the body belongs to Dr. Meredith, who has been poisoned in his own home, leaving behind only a very cryptic message in the form of a figure eight as a clue. Meredith, it seems, had fallen on hard times, made his way to the western gold fields, and came back with enough gold to keep things afloat. Sadly, when Dr. Meredith is killed, no one knows where he's hidden the gold; without it, his daughter Lilian  is headed for penury.  Luckily for Lilian, when the family fortune wanes, another family buys the home and allows Lilian, her governess (who sleepwalks and has a slimy brother named Arthur)  and the very-young, flighty and flirtatious Spanish bride Dr. Meredith had brought home with him to live at Meredith Hall.  This novel follows two main storylines -- first, of course, the hunt for the murderer; the second, the search for the hidden fortune, but embedded here is veritable hotbed of sexual energy, both male and female.  The central character in this book is Joe Meredith, who, like Redfield in The Dead Letter, has been ostracized from the family once suspicion is cast on him for Dr. Meredith's murder.  Unlike Redfield, though, Joe comes from a less-settled, less socially-approved background, eventually undertaking medicine as a field of study in order to please his now-dead uncle; his "rough" upbringing practically ensures that he would naturally be suspect.   This story finds Joe taking on a number of wild disguises (a laborer, and a "mulatto" waiter, as just two examples) in order to keep up his investigation into the identification of the true murderer and to simultaneously spy on the action on at Meredith House.

Nickerson reveals in her book that

and as I continued to read through both novels here, this idea became clearer with every page turned.

As I said earlier, there's no possible way to go into all of the under-the-surface things I uncovered  while reading these books, and both are much more complex than I make them out to be here, but trust me, there is a lot between the covers that is discussion worthy. For someone like myself who loves these old books and who tries to read between the lines as to the cultural climate, the politics, and the historical significance of the time in which they were written, it is a goldmine.   On the other hand, they're definitely not for everyone, but if for no other reason, the fact that Metta Fuller Victor made an appearance before Anna Katherine Green (who I've always believed was the first American woman detective novelist) makes her extremely readworthy.