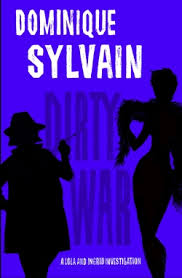 
Well, this just royally sucks. Not this book, which is quite good,  but the fact that the next book isn't out in translation until October of next year, according to the publisher's website.  I'm the world's most impatient person when it comes to series books -- I read so few of them any more that when I find one I like, I want to read more as soon as possible. And this series I really do enjoy, so waiting is going to be a pain.

The first novel I read by Dominique Sylvain was her The Dark Angel, which I just LOVED. The characters are what made this book work well: the dynamic between retired Commissaire and the blonde American stripper (Lola and Ingrid, in that order) had me in stitches and in awe of just how refreshing these quirky characters are to read.  When I picked up this book, I assumed it was book number two in this series but it's not. According to a few places I looked at, Dirty War is actually book number five; it seems the intervening three series installments are as yet untranslated: La fille du Samouraï, (#2), Manta Corridor (#3) and L'absence de L'ogre (#4). As I've said many times, I really don't understand why we can't have books in translation in their publication order -- it would be nice not to have to backtrack each time, especially in a series that is based on characters like the ones in this series.  Like here, we have to kind of ignore that three books have fallen in a hole with all of the ongoing character development; even more maddening is the fact that in Dirty War, the two main characters are not at front and center of the story, although they're still just as odd and are still working around the police.

This book is much, much more serious in tone than The Dark Angel. It takes on the form of a political thriller that focuses more on Sacha Duguin, the very gorgeous police inspector who is in charge of discovering who killed a young attorney named Florian Vidal.  The case draws Lola's attention when it turns out that the same method of murder was used five years earlier in the death of  Lola's former colleague, Toussaint Kidjo. Instinctively she knows that such a strange way of killing cannot be entirely random -- so along with Ingrid and a dog named Sigmund, Lola begins her own investigation. Without giving away anything important, it turns out that both murders have ties to Africa.  Vidal's death, however, also captures the attention of a "newly formed national intelligence agency" (according to the cover blurb), whose top guys are reluctant to share information with the Paris police department, resulting in a power struggle.    Sacha is appointed to solve the case, but what he uncovers leads to the titular and resulting "Dirty War" played out among the powers that be.  The stakes are high here for Sacha, in terms of his career, but they're even higher for the opposition trying to prevent the exposure of long-hidden secrets.

Sylvain could go well beyond just crime fiction if she wanted to; her play on the old fable "Death in Samarkand" that appears both at the beginning and ending of this novel reveals just how very good of a writer she is.  She is also very, very good at constructing a story that turns out to be so meticulously plotted and so ingeniously twisted that it's nearly impossible to put the book aside.  With such an intense storyline, though, she sort of leaves Lola and Ingrid behind, which is so sad for me, but what few scenes they are in are just gold.  It's a shame really, but I see why they have to sort of stay more in the background than they did in the earlier novel.

I normally am not a fan of thrillers, political or otherwise, but this one never gets down to that level of incredulity that so I see in so many of them; this one is rather intelligent and easy to follow without having to wade through a huge number of intersecting (and often ridiculous, in my opinion) plot lines. What I didn't care so much for was that at the end of this book, things got a bit rushed -- and a lot of the expository bits came out sounding like details of an author's outline.   Sadly, I can't provide an example since doing so, of course, would blow the show. However, I was beyond entertained here, in a great way, and I'm really looking forward to the next one, which seems to pick up where this one ends. I certainly hope so, because waiting 10 months to see where the cliffhanger ending goes is just going to be pure torture!  aarrrggghhh!!!!

Definitely recommended -- but do read The Dark Angel First.