it's weird, it's obscure, but most of all, it's fun: The Mummy, by Riccardo Stephens 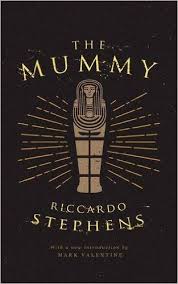 There are just some times when I want to curl up with a cup of hot chai tea (milk, no sugar,  thank you very much) and read something just for fun. No serious thought needed, no brain strain, just fun. And it doesn't hurt when there's a mummy involved -- it brings back good memories of childhood not only in terms of sprawling on the couch on a Saturday afternoon to watch the old black and white mummy movies, but also of reading countless pulpy stories involving Egypt, which I found fascinating back then. So when Valancourt announced that they were coming out with this book, I pressed that buy button faster than you could say Imhotep. I wasn't quite sure what to expect, but when I started reading it, it turned out that it's indeed much more of a good, old-fashioned mystery novel rather than a book where a mummy is brought back to life by tana leaves.

As it also turns out, it's a book I can't really talk about too much without spoiling things for potential readers. The basic outline goes something like this:  a certain Doctor Armiston, who lives and has his practice in the West End of London, is called upon one day to come to give his opinion on how a man met his death.  He is taken to the Albany where he finds a young man who has died from a broken neck. After giving his opinion on the matter and sending for the police, he gets up to leave.  Opening the wrong door to go out, he finds himself staring at a strange object, which he is told is a mummy case, with a mummy inside.  According to the good doctor,


"It was my first introduction to the Mummy. I wish it had been my last."

And indeed, there will be more deaths, and with each one, the mummy case is on the premises.   Eventually, Armiston learns that the strange writing on the outside of the case contains a curse, promising vengeance on anyone who dares to upset the mummy's rest.  Being a man of science, Armiston isn't buying it, but no one involved is talking.  He is brought in to a society of "Plain Speakers," where, now that he is a member, he is privy to the truth of things.  Armiston will take it upon himself to try and figure out exactly what's behind this so-called curse before there are any further deaths, which are still unexplained.

Now, if this doesn't grab your attention, I don't know what will.  Granted, it sounds like the prelude to a horror film, but I can guarantee that this is a first-class mystery with a number of elements that blend with that same pulpy aesthetic that I've always loved. There are gentlemen at their clubs, strange "bohemian" societies, science gone awry, and of course, the element of detection.  On the back of this book there is a blurb that says this book "bears comparison with the works of Conan Doyle and Robert Louis Stevenson," and that is a good description that I can live with.

It won't be everyone's cup of tea, but it is most certainly mine. Granted, it can be boggy and slow in parts, but patient readers will be rewarded.   Highly, highly recommended to anyone interested in vintage mysteries with a touch of pulp on the side.  Very high on my internal shrieks-of-delightometer.