*"I didn't know there was a book" -- Bunny Lake is Missing, by Evelyn Piper

"If anything's happened it's a judgement, that's what I say!"

I just noticed right now while looking at the ISBN on the back cover that at the time this particular edition was published, plans were in the works for a remake of the 1965 Otto Preminger film of the same name. The newer version never materialized, so for now, the '65 film is what we've got, which is kind of sad since a) the Preminger film has only what I'd say is  a tenuous connection to Piper's novel and b) the acting is less than stellar.

Picture this frightening scenario.  A young mother  has come to pick up her three year old daughter after her first day at preschool.  Since Blanche Lake hasn't been at the school before except just once while dropping off her child Bunny (real name Felicia) earlier that same morning,  she doesn't know any of the other mothers waiting there and, while waiting for her own little one, watches as all of the other kids make their way to their parents.   A search of the school and conversations with teachers and the people in charge reveals that no one remembers even seeing Bunny that day.   The police are called in, but soon it becomes apparent that even they are having trouble believing that little Bunny ever existed -- especially since there is nothing in Blanche's apartment to show that a little girl even lives there, not even a photograph.  In fact, anything that might help Blanche to prove to the cops that she does indeed have a daughter is simply non-existent, not helping Blanche's case at all.  When Blanche catches on that they think she's making this all up, she sets off during the night on a bizarre, at times surreal sort of adventure through streets of New York looking for her child or at least some sort of proof that there even is a child.

But of course, there's way more than just the search for a missing child here.  Blanche has moved to New York City from Providence, where she had an affair with a married man and became pregnant.  Remember -- this novel was written back in the late 1950s, when single motherhood was frowned upon, and as the story progresses, it becomes very obvious that Blanche is trying desperately  to keep her secret from being revealed. Her mom is no help, still not accepting of the situation, and a trusted friend with whom Blanche was staying while pregnant and just after Bunny's birth wanted to "help" her by adopting Bunny.  She is judged and found lacking, not only for Bunny's illegitimacy, but also because she's become some sort of unfamiliar monster in the form of a working mom.  As one person in this drama notes,  "If anything's happened it's a judgement, that's what I say! That's what they learn them in college—how to drop their kids and leave them for others to take care of."  There are also a number of literary references throughout the story that bring the situation into perspective, such as the pronouncement by the shrink Dr. Newhouse, who realized that "this girl believed she was a wicked girl, and that she should be stoned through the streets with a big red A on her bosom."

When all is said and done, Bunny Lake is Missing is a fine novel that examines motherhood, sexuality, the changing lives of modern women, and societal judgments just as much as it is a crime story.  There is much more, of course; in the edition I have there is an entire analysis in the back of the book which will shed even more light.  It's a very dark story that had me wondering if in fact, there really was a Bunny Lake, or, as is suggested, something horrific had happened to her.  While the ending (and the unraveling of the story) may leave a bit to be desired, the crime aspect of this novel, it seems to me, isn't really the point at all. 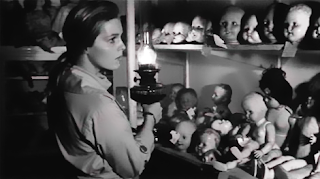 Now to the film, which has some basic elements of the novel, but very few.  Most everything has been changed, including the location -- the story in the movie takes place in London.  Blanche is now Ann (played by Carol Lynley)  and she has arrived from the US to live with her brother Stephen (who is NOT in the novel and is played by Keir Dullea)  in an apartment there, owned by a disgusting perv played by Noel Coward.   Bunny Lake does go missing from the school (unexpected joy of all joys -- one of my all-time favorite actresses ever, Anna Massey, plays one of the workers at Bunny's school)  but rather than offering us the story as written, it gets changed big time here, winding down into one of the most bizarre, surreal and downright creepy endings I've ever seen.  The final scenes gave me a big case of the willies -- trust me, I'll never look at a swingset in the same way again.  In this case, book wins hands down, but the movie will definitely disturb and despite the not-so-perfect acting,  is well worth watching.

I would read the book and then watch the film; both are definitely recommended.