a little belladonna with your bovril broth? The Deadly Dowager, by Edwin Greenwood 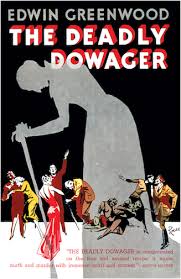 "There's only one thing that matters, ... and that is the Family."

So sayeth the grande dame Arabella, Lady Engleton of the de Birketts, a family whose "fortune -- or misfortune" came into being with a reward from none other than Thomas Cromwell during the reign of Henry VIII.  Flash forward a few centuries, and meet the entire de Birkett clan, and do it quickly before something terrible happens to them.

Arabella, now 83,  has for the last 65 years of her life devoted her energies to restoring the de Birkett's fallen fortunes, with very little in the way of results.  She's pinned her hopes on her young grandson Henry, age 20, whose mother died when he was three, and who's been in Arabella's care ever since.  Her goal is to


"somehow set the Family on its feet again, enable Henry to wear his coronet in the House of Lords and look his peers in the eye without the stigma of poverty hanging round his head like some disreputable halo."

So, as the novel opens, Arabella seems to have hit on a marvelous scheme for ensuring that Henry will be well provided for and that the de Birketts will continue to maintain their place among their noble peers.  She has called a "Family conclave," bringing anyone connected by blood or marriage (however tenuous that connection may be in some cases) together at their home in Mount Street, London.  Her idea: to insure all of their lives up to twenty thousand pounds. That way, when the policies mature, young Lord Henry should find himself with well over forty thousand pounds to "sustain his position in the world and his dignity in the House of Lords."  God help anyone who doesn't agree, like poor old Uncle Alfred, who is "leaving his little bit to charities," because death has a funny way of making an appearance -- along with a new will leaving it all to Henry.    And the body count begins to rise, slowly but surely. I mean, seriously -- they all should have figured out that this was just a very bad idea.

One would think that the "deadly dowager" would be happy at this juncture, but no, that's not quite all that is up her sleeve.  While young Henry's fortune is being planned (and, if you'll pardon me,  executed), Arabella has other plans for her young grandson that involve marrying into a wealthy family to better secure the de Birkett position and lineage. The problem is that Henry's already in love with Dora, and well, to the Lady Engleton, his choice is simply not acceptable.

So now people may be thinking "oh great. You've just wrecked the whole plot, the whole storyline, the whole book, in fact," but the truth is that I  haven't given away any more than the back-jacket blurb reveals. The fun is actually in waiting to see what our dear, deadly Arabella is going to do next, as well as the truly ingenious characters in her orbit.   As Mark Valentine has written in his introduction to this novel,

aside from "the book's eponymous assassin," and the resulting ensemble makes for great fun, as does the lovely satire on class in 1930s England.  There is also budding romance here which normally I don't care for, but here it works and is another reason for all of the out-loud chuckles coming from me that kept coming the entire time I was reading this book.  There is a great one liner from the New York Times contemporary review of this novel that pretty well sums it all up:


"Quite the jolliest crime story that has come our way in many moons."

I know murder isn't supposed to be funny, but well, sometimes it's just refreshing that way.

While the 1930s may not be everyone's favorite period for crime reading, The Deadly Dowager was just plain absolutely delightful -- farcical, yes, in its own way, but I defy anyone to read this and not laugh at some point during this novel. Crime light, indeed -- a perfect summer read to toss in the beach bag, lay back and totally enjoy.  I just loved it.