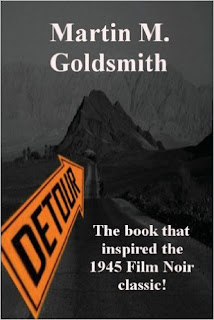 Toward the end of this book we find the main character musing  about how great things would be if "our lives could be arranged like a movie plot," and how MGM does a "much better job of running humanity than God." As he says, "Things are plotted in straight lines," and


"There are never any unexpected happenings which change everything about the hero but his underwear."

In this book, though, Alex Roth finds his life turned upside down precisely due to a number of "unexpected happenings" that detour him away from his dream of a decent life with the woman he loves.  Detour is a compelling, dark novel and the film based on this book is also really good, considering that it was made on a shoestring budget and took only a few days to make.

Briefly, Alex Roth is thumbing his way across the US from New York to Los Angeles to reunite with his singer girlfriend Sue Harvey. Although Roth had worked hard training to be a classical violinist, he ends up instead in a club in New York city playing with a band.  That gig ended one night when a customer decided to make a pass at Sue and decided to "pat her fanny," causing Alex to see red. It also caused him to lose his job. A month later, just days before Sue and Alex had planned to be married, Sue decides to hotfoot it to Hollywood to take her chances.  Alex, down to his last fourteen dollars, is sort of stuck there, but eventually he too decides to head west to see Sue and to try his own luck in the movies, a la "Heifetz or Kreisler."  So off he goes, and makes it as far as Texas before the money runs out. There he does a "Jean Valjean," stealing food and in turn ends up in jail for a month.  Back on the road once more, Alex is somewhere on Highway 70 in New Mexico when a car stops to pick him up, and it's then that, as he informs us, we have "reached the part where all the mess begins."

And oh, what a mess it is!  Alex's immediate problem is bad enough and great fodder for noir novels, but once he reaches California (alone, but I won't say why), things spiral out of control when he runs into one of noir fiction's most evil femme fatales, Vera.  In one of the best lines in this novel, Alex describes her as being  "like a frozen stick of dynamite; you never knew when she was going to blow," a perfectly, spot-on accurate characterization.   She knows something that puts Alex completely in her power, and the reader spends quite a bit of time in Vera's dark, claustrophobic existence.   But Alex's story is only part of this novel, since Sue's story takes up part of this book as well, the two narratives alternating throughout the book.   Considering how much Alex loves her,  Sue's story, especially her feelings toward Alex,  comes as quite a surprise -- and also allows her to take on the role of femme fatale in her own right. Sue even admits it, noting that she's


"recognized myself to be a weapon, every bit as formidable as a knife or a gun, and liable to do untold damage unless kept in check."

Between Sue and Vera, the darkness and the snares close in quickly around the men in their lives and just doesn't let up.  Not for one minute.

So we have deadly women, life's plans taking a huge detour for pretty much all of the main characters in this novel, and an overwhelming fatalistic atmosphere all combining here to make for an incredible book, which in my opinion definitely falls squarely into the noir camp.  As I'm fond of saying, it's one of those books that reminds me of watching a train wreck, where you just know beyond a shadow of a doubt that something terrible's going to happen, but you just can't take your eyes away from what's coming. Considering the short length of this story, it grabbed hold of me and wouldn't let go. I have to say though, that in real life,  the odds would have to be pretty much astronomical in terms of Vera's first meeting with Alex and the threat she's holding over Alex's head, but then again, coincidence, fate, whatever you call it,  is a huge part of the story, I think in this novel.  I think Alex's film counterpart says it best when he notes that "That's life. Whichever way you turn, Fate sticks out a foot to trip you."


And now to the film, which I really enjoyed, by the way. Reviews are available everywhere you turn, so I won't go into it, except to say that between book and movie, Sue's narrative somehow doesn't make it onto film, leaving the renamed Alex (now Al Roberts) and Vera in the main frame.  For movie purposes, though,  it works and works well.  The opening sequence is just dynamite -- with Al in a roadside diner somewhere looking scraggy as they come and holding on to his cup of coffee.  The music starts on the juke box and it just happens to have been Al & Sue's song, which sends Al deep into his memory, letting us know exactly how he's come to be where and who he is at the moment. And it just gets better from there. I know there's another later version, but I think I'm going to give it a miss since this one was just so good.

Once again a yes/yes book/movie. More importantly though, I'm having so much fun with this page-to-screen thing -- reading books and watching movies I might not have picked up otherwise.  So it's a win/win for me too.  And while I get that not everyone shares my enthusiasm for old novels from seventy-plus years ago, I just love this stuff, and above all I've been noticing that there are some things that come down from generation to generation without much change.