Off to Italy this time with The Disappearance of Signora Giulia, by Piero Chiara 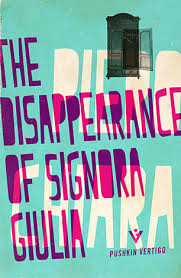 Set in 1955, The Disappearance of Signora Giulia is one of the most truly baffling mysteries I've read in quite some time.  By the time I finished this book, I was totally perplexed.  And trust me -- after having read thousands of mystery novels in my time,  "baffling" is not a term I throw about willy nilly, but I'm certainly not going to spill my guts as to why I found it so.

Commissario Corrado Sciancalepre returns from a conference with the Chief Constable in the "small town of M_____" in Northern Lombardy and gets a big surprise.  Waiting in his office is Esengrini, the area's "most agile and authoritative criminal lawyer" who is there with an "incredibly serious matter," which, as he puts it, will likely turn his entire life "upside down."  It seems that his wife, the titular "Signora Giulia," has left home, and Esengrini needs Sciancalepre's help in trying to find her.  La Signora was supposed to have caught a train that day for Milan, which she does every Thursday, to see their daughter Emilia at her boarding school, to make the rounds of various places in the city, and to do things for her friends while she's there, catching the two p.m. train and coming home by 7:30 in the evening.  On this particular Thursday though,  it seems that Signora Giulia never caught the train.  When Sciancalepre returns with Esengrini to his home, he discovers that perhaps she'd been planning to stay longer than her usual few hours this time -- her bedroom is "a complete mess," a lot of clothing has gone with her and so has her jewelry.  Her husband had also heard her "moving around continually, opening drawers, shifting chairs" the night before, and according to him, she was "agitated."  But wait. It's here that the first of a number of secrets pervading this novel comes tumbling out, as Esengrini confesses to the Commissario that he'd known for some time she'd been seeing other men on those Thursdays, using the visits to her daughter as a cover.  He'd even had her followed four months earlier because Giulia, 38, had started turning cold toward her 60 year-old spouse in the last year, and Esengrini had wanted to know why.  Sciancalepre offers to try to find her, but this is 1955, and he needs Esengrini to bring a charge against her so he can do so.  Esengrini decides it's going to be a case of "abandoning the marital home," which is enough for our Commissario to begin his search.  But this is definitely NOT going to be an easy or simple case of finding a runaway wife, and Sciancalepre doesn't realize at the time that this case is will be years in the solving, and even then ....

Despite some minor lulls here and there in the telling, The Disappearance of Signora Giulia is beyond compelling and it's certainly one of the most unconventional crime stories I've ever read. It is a true whodunit in every sense of the term, with a big, no make that huge,  twist I never saw coming.  When I finished it, the first words coming out of my mouth were "that's just brilliant," and if anyone reading this post decides to read it, you'll see why.  I pondered over that ending for some time and when a book makes me do that, well, I call it a good one.