another seriously good novel, this time from Russia: The Investigator, by Margarita Khemlin 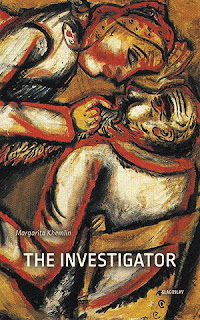 "Irredeemable guilt, you either forgive or forget without forgiveness. But living with it is impossible."

This book is yet another example of why I'm a huge advocate for smaller presses, who tend to put out some of the best and sadly unknown work, making for some of the most intelligent writing and through them I've been introduced to authors whose writing I would read again and again.  Let's take this book, for example, The Investigator, by Margarita Khemlin.  I had never heard of either Khemlin or this particular title before Ksenia at Glagoslav got in touch (and I thank you very, very much for the books you sent) re Slavic books in translation.  I actually turned her down at first because of my majorly-sagging tbr shelves through November,  but she assured me that there are no time pressures so I agreed. Imagine my surprise when I looked at the back cover and discovered that it was shortlisted for the 2013 Russian Booker Prize.  I knew I had something special here and as it turns out, I was absolutely correct.

What lies at the very heart of the story in The Investigator is something I never expected, remaining a mystery throughout the entire novel and I aim to keep it that way here, because any hint will wreck what lies beneath.   Set in the Ukrainian SSR in the 1950s, in the town of Chernigov, the story is narrated by police captain Mikhail (Misha) Ivanovich Tsupkoy, who was previously a military intelligence officer  until he was demobbed and became an police investigator.  The novel is, as he notes, his reminiscence of "a single incident from my long and extensive career," the death of one Lilia Vorobeichik in 1952.   A suspect in her murder comes to light very quickly, an actor named Roman Nikolayevich Moiseenko, who eventually confesses to the crime, and then saves himself a court trial by hanging himself in his cell.  Case closed? Well, we're only at page eight, so obviously not. As it happens, two events spark Mikhail to continue digging -- his best friend's suicide, and the interference of a certain neighbor of the dead woman who somehow manages to come up with the heretofore undiscovered murder weapon.  This woman, dressmaker Polina Lvovna (Laevskaya), turns out to be the proverbial thorn in Misha's side, sowing doubt on his integrity as an investigator to whoever might listen to her, which turns out to be troublesome for our investigator. Secrets acting as smokescreens abound in this book, making Misha's job all the more difficult as he tries to unravel them to get to truth. But as the reader moves closer and closer to the why of things, it seems that everyone involved here has something to hide and that they have their own reasons for holding their secrets and their stories close.

Now, when a novel starts out with a murder, it's easy to understand why it might be labeled as crime fiction, but The Investigator turns out to move well beyond the standard crime tropes to become a serious piece of historical fiction taking the reader beyond the novel's present into its past and back again.   It can come across as murky or even a bit silly at times, as Tsupkoy travels hither and thither between Ukrainian towns interacting with a complex set of characters over and over again; however, among other things, what seems to come out of this (for me, anyway), is that the people who live here are very much connected to their past histories, to each other, and most especially to the very troubled history of this area, and that it is impossible to separate any one of these elements from the other.  I won't say why, but this point becomes very, very clear by the end of the book.  There is a LOT of ambiguity here to be examined, and the stories that are eventually revealed are beyond satisfying as far as my own interest as to what drives people to do the things they do.  I'll also say that there are some very big surprises to be had that I wasn't at all expecting.  Sorry to be so vague, but I don't want to give away a single thing.

Looking at it solely from the perspective of a crime fiction reader, the story of the investigation itself  is a good one and as noted earlier, the surprising solution is kept at bay until close to the ending, as is the secret that underpins everything.   At the same time, also noted earlier, this book goes well beyond the realm of a simple crime novel, and becomes a lovely yet disturbing piece of historical writing done very, very well. If The Investigator is an example of what Glagoslav has to offer, they will be seeing their books talked about here a lot.  Highly, highly recommended for serious readers who are always looking for something new and different.  Frankly,  I've read some seriously excellent books this year, and this one just got added to that list.