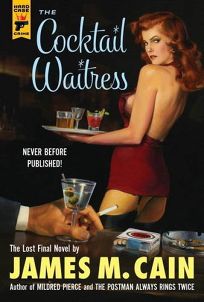 “Something about you doesn't quite match up.”

Ostensibly the story of a woman's anguish about getting her child back from relatives in whose care the boy has been left, and how she goes about doing so, what we have here is a sort of sleaze version of the Perils of Pauline, as the narrator gets stuck in bad situation after bit situation, none of it, of course, her fault.

The novel is set up as a confession, of sorts, being taped by main character Joan Medford in the hopes that it just might find its way into print, as she says, "to clear my name of the slanders against me, in connection with the job and the marriage it led to and all that came after..."  The cops are certain she's killed her husband, but one of the pair sets her up with a job in a restaurant which turns into a job in a cocktail bar.  It's here where the action starts, as Joan puts on a pair of "trunks," and agrees to "leave the bra off," because it brings in more tips.  According to Cain's notes reprinted in the afterword, Cain meant for this book to "turn on the hot, close, sweaty, female smell of the cocktail bar," a place where soon the "trunks" are replaced by "hotpants", and where Joan soon enough has her hooks into a wealthy guy who leaves her big tips. In her mind, the more money she saves, the sooner she gets her little boy back -- and as Cain continues to ask throughout this story, what woman wouldn't do anything to have her child back with her?  The problem is that Joan Medford is the most unreliable narrator on the planet here, so anything, and I do mean anything this woman says has to be taken with major grains of salt.

There is a huge difference between writing a femme fatale and writing a skanky gold-digger (which in my head are two vastly different entities), and for my money, with Joan Medford, Cain invested his writing time on the latter. The plot also tends to meander, although I'm not sure exactly how much of this is due to the fact that the editor has gone through a number of different manuscript versions to come up with the finished product. How do we know how Cain might have put this all together had he ever managed to finish his book?   It certainly lacks the control and the polish of his Double Indemnity, Mildred Pierce or The Postman Always Rings Twice.  This novel is sleaze-o-rama on a grand scale, and don't let anyone tell you otherwise. Unlike Cain's big three, all of which in my opinion are works of art, The Cocktail Waitress is just pure trashy story that gets trashier as the novel goes on. Call me silly, but aside from the fact that this is a previously-unpublished Cain  novel, I just don't see the point.

I really, really wanted to like this book, but well, I just didn't.
Posted by NancyO at 11:19 AM