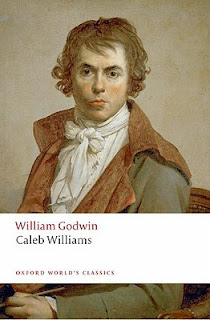 "They told me what a fine thing it was to be an Englishman, and about liberty and property, and all that there; and I  find it is all a flam. Lord, what fools we be!"
-- 195

According to Ian Ousby, author of Bloodhounds of Heaven, this book is the first in English fiction to "display a sustained interest in the theme of detection," and that the book's hero, the titular Caleb Williams, is "the first important detective in the English novel."  Well-known British writer Julian Symons also noted that this book was important in the history of crime fiction, saying that it is in this novel that "The characteristic note of crime literature is first struck," and that it's "about a murder, its detection, and the unrelenting pursuit by the murderer of the person who has discovered his guilt."

Caleb Williams is also the first choice in this year's quest to read early crime fiction through the onset of World War I, which I've tagged as ecfp for early crime fiction project and which will be the asterisked posts for 2017.   It's also very good, and while it works very well as a commentary on social injustice, class and the abuses of power, it's also a novel that finds a man on the run after uncovering some startling information.

The nutshell version is this:  young Caleb Williams finds himself working as secretary for a respected local squire, Fernando Falkland.  He becomes curious as to what's up with his employer, who has taken on a solitary life with "no inclination to scenes of revelry and mirth," avoiding "the busy haunts of men." After about three months of employment, Williams is accused of spying on his master, which leads him to feel "uncommon dejection and anxiety," so for help he turns to Falkland's steward Collins for answers.  What he learns only increases his curiosity, and when Falkland reveals the secret he's been hiding for so long, Williams takes a vow that he will never disclose what he's learned.  He also decides that it's time to move on.  Unfortunately, due to the the nature of what Falkland is hiding, the squire decides that Williams must be punished for what he knows, and starts a relentless campaign of revenge and terror.  The novel follows Caleb through the persecution hell that Falkland puts him through, leading Caleb to fight for his very survival in the process.

There is a vast amount of scholarship on this novel available online, so I'll just throw in a couple of observations.  I'll agree with what Ousby says about this story --  that the detection in this book starts out as "an activity apparently designed to establish moral and intellectual clarity" and that "the detective, voluntarily or involuntarily, assumes the role of an agent of justice, seeking to distinguish good from evil and to identify the source of evil."  But, as has happened in so many of the better crime novels that have come after this book, Godwin reveals that "good and evil" and "the detective and the criminal" are "inextricably linked," growing into what he calls "symbiotic twins."   And in his piece about William Godwin in The Literary Encyclopedia, Andrew McGann notes that this book is also important in another area, the linking of "psychological exploration with political radicalism" which has also long been prevalent in crime novels.

It is a wonderful novel, to be sure, and while some people may find the prose a bit slow going, once you  pick up the rhythm there's a great story in here. It's most certainly a tension-ratcheting piece of work and quite frankly, I was so tempted to turn to the end to see what happens.  I didn't, but the temptation was definitely there.  The novel appeals to my sense of reading crime fiction with purpose, which for me is all about human nature and what it says about the factors (social, political, economical) at work that have everything to do with why people do what they do. Godwin makes this exceedingly clear in Caleb Williams -- making it well worth the time I put into this book.  It's another one that I will say is probably not for everyone, but oh  my gosh -- what a great novel to kick off my reading project!!

Anyone interested in reading about the author will find a great article here by Pamela Clemit, the author of the introduction to this edition of the novel; another excellent source is the Stanford Encylopedia of Philosophy.

Definitely recommended and for me, highly satisfying.