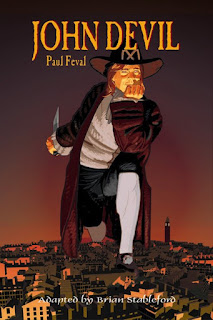 Just recently I finished Charles Warren Adams'  The Notting-Hill Mystery which a number of very smart people have claimed as the first detective novel.   However, there's another contender, and that's this book, Jean Diable, translated into English as John Devil.  If you read this interview with Professor Paul Collins at NPR, he states very clearly that The Notting-Hill Mystery was first published in book form in 1865 (although serialized from 1862-1863),  and yet, Jean Diable came into book form in 1863 after being serialized in 1862.  So technically, if one counts the serialization, it could be a toss up between the two of these books as to which one actually wins the title.  However, I think that looking at it from translator Brian Stableford's point of view (with which I happen to agree), he says that


"most remarkable thing about Jean Diable is that, although it includes and makes much of the character of the detective, it is not a 'detective story' at all, in the sense to which we have become accustomed." (7)

He's absolutely right here -- in this book, the focus is much more on the criminal genius who is John Devil rather than on the detective who spends his career trying to bring him to justice.  Truth be told, it doesn't really matter to me in the long run whether or not this might be the first detective novel,  but I couldn't pass up this book as part of this year's ongoing look at the history of crime fiction/mystery.

Anyone wanting to know more about Paul Féval will find bio and other information here, in an article by Robin Walz in Journal of The Western Society for French History.  Something important to consider is that  Féval's  Habits Noirs (Black Coats) series, as Walz notes,


"had a profound influence upon the subsequent development of the French roman policier";

and Féval also made a huge impression on Emile Gaboriau, whose L'Affaire Lerouge would be published in 1866.  Look for that book to make its way onto these pages here very shortly.  Stableford has also included quite a lengthy section about the author, as well as comments about some of his other books, which thankfully are coming back into print thanks to Mr. Stableford and Black Coat Press.

Okay, so now to the book, about which I'm not going to say much, because a) reading it is an experience in itself and b) it's so convoluted at times with backstories, deceptions, a villainous plot bordering on "techno-thriller" and most definitely conspiracy fiction, and a rather huge cast of characters that I couldn't really explain it anyway.  Basically, it's like this:  John Devil is truly one of the most evil crime geniuses ever to grace the pages of fiction, and no matter what he does or what he's responsible for throughout this story, he remains virtually untouchable.  He is the nemesis of Chief Superintendent of Scotland Yard Gregory Temple, who has spent his entire career trying to bring him down  to absolutely no avail, and whose single-minded quest pushes him past the brink of madness.

This isn't a casual mystery/crime novel in any sense of the word -- it can become so  complicated in fact, that by the end of the novel I was beyond grateful to Stableford for the afterword that not only explains things, but puts it all in perspective as well.  However, once I got a feel for how this book works, I had to finish it come hell or high water, and at times I didn't know whether to loathe this master of crime or to cheer him on for being so deliciously diabolic.  In the end though, I felt so badly for Temple that I ended up siding with him against his monstrous foe.  It's such a gripping story that it will lock onto your brain not too far in, and you'll be amazed at just how much capacity one man can have for sheer evil and even more, how he manages to draw others into a web of complicity.

Again, this is probably a niche read that will appeal mainly to old-pulp fiction readers, as well as those who may be interested in the history of crime fiction or in French crime fiction of yesteryear.  For me, it's a win, although I will say it took me a while to feel completely immersed in the story. Once I was there, though, there was no getting out until it was all over and I could stop holding my breath.

I loved this book, and more of Féval's work is on its way to my house where it will be given a place of honor on my home library shelves.