back to the present with A Nest of Vipers, by Andrea Camilleri 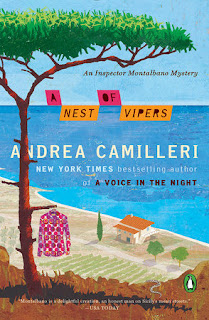 "... it was one thing to send the killer of a good man to jail, and it was something else entirely to put away someone who had killed a stinking scoundrel."  -- 43

Here we are at book 21 -- I don't believe that I've ever stuck with a single crime series for this long, but anyone who's even read one of my Camilleri posts knows what a fangirl I am for the escapades of Salvo Montalbano and his colleagues.  According to stopyourekillingme.com there are only three more books left to be translated/published as of 2016, and it will seriously be the end of an era for yours truly when the last one is released. As for this one, the title is beyond appropriate and although I won't say why or how, it moves into a zone of darkness in which  Camilleri found himself  lacking  "courage" enough to fully explore at one time in his writing career.  I don't mean to be intentionally cryptic, but once you read this novel, you'll understand.

Those dream sequences that have been used by Camilleri to open these books for the last several years are not just throwaways -- they will, in time, come back around to have something to do with the actual plot. That is very much the case here as Montalbano becomes involved in the case of the murdered Cosimo Barletta, a wealthy widower who was found dead in his seaside home.  With very little to go on except for some strands of hair, the police start looking into Barletta's background and discover that he had not only, as the cover blurb notes, "a history full of greed and corruption" including loan sharking, but also a rather sadistic hobby involving a number of young women, any of whom may have had a motive to kill him.  That's about all I give away about plot and even that can be found from the cover description, but the story, as I said, reveals a darker side that just might start twisting your guts as it starts winding down to a solution.

Normally I would have nothing but praise for one of Camilleri's novels, but this time around I think that Camilleri didn't go his normal distance.  To be sure, the things I enjoy about this series are still here -- the camaraderie between Salvo and his colleagues, the jokes built around the prosecutor and the doctor, the lovely feel of this little slice of Sicily and Salvo himself -- but despite the somewhat horrific story which unfolds, this is definitely not up there with the author's best books in the series. First of all, I cottoned on to what was going on long before Salvo figured it out which is never good; second, there's the introduction of a somewhat enigmatic character whose purpose isn't quite clear until the end, where he provides a sort of verbal  deus ex machina (that I won't discuss) that gives Salvo a bit of  a nudge in the right direction.  Considering that Camilleri had actually written (but not published) this novel in 2008 after writing The Potter's Field (2007) which later won him the International Dagger Award,  well, it could have been a much stronger book than it actually turned out to be.

Still, as I said, once I became aware of where this story was headed, my stomach was churning, so it did provoke a strong reaction; I was also quite impressed by one of the main themes in this book in which Montalbano spends time pondering,  as the back-cover blurb and  the quotation with which I opened this post reveals,  "where justice lies," and in this case, readers are left with an outright serious conundrum. And now that I'm actually thinking about it, the way in which Camilleri sets up the question within the titular "nest of vipers" is very nicely done. It's too bad I can't explain this thought in more detail  but careful readers will understand.

I am pretty much unyielding (okay, downright persnickety)  about reading books in series order, so my advice is to not let A Nest of Vipers become your starting point in this series -- each book builds on the previous so you'll miss way too much if you don't read them in order.  And while it may not be Camilleri's  best, this book is still well worth reading, especially for die-hard fans of the series among whom I count myself. 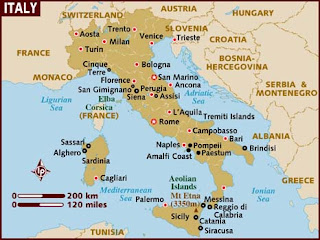